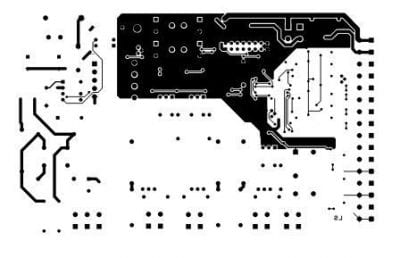 A simulation of the galvanic copper deposition in PCB manufacturing

Before we manufacture a PCB, we carefully analyse the data we receive to catch any potential production issues which may affect the quality and the long-term reliability of the finished product. Any issues we find are reported back to the customer for discussion and resolution.

Until now galvanic plating is the one area where we have been unable to predict accurately how a particular design will perform. The thickness of the plated copper deposited on any part of the board depends on the layout density. If the density is low we risk over-plating; if the density is high we risk under-plating. Over-plating (too much plated copper) means that component holes may become too small. Under-plating (too little plated copper) may weaken the hole walls so that plated-through connections may crack during assembly and lose long-term reliability.

The goal is an even copper density and even plating across the PCB. When we place PCBs on our production pooling panels we take this into account as far as we can. We can also place extra copper patterns between or around the PCBs to even out the density (so-called robber bars). However we can only go so far to achieve a uniform plating as we cannot modify the actual design of the PCB. This can only be done by the designer.

Historically designers have had no tools to help them evaluate copper density. Today Eurocircuits can offer a solution, an image of the board colour-mapped to show potential areas of over- and under-plating.

We use special plating simulation software which divides the board into small cells. The copper density in each cell is compared with the average for the whole board and the cell is assigned a colour. Lower than average copper density is coloured on a scale from green (average), through yellow and orange to red. The more red, the lower the relative density and the higher the risk of over-plating in those areas. Cells with a higher copper density are coloured on a scale from green to dark blue. The more blue, the greater the risk of under-plating.

Armed with this visual data the designer can add copper areas where the density is low or reduce large plane areas .

We will also provide a plating index which measures the uniformity of copper density on the board. A completely uniform board has an index of 1 which means that no plating problems are expected. Lower values show less uniformity, highlighted on the visual image by the red and blue areas. If the index falls to 0.4 or less, then special attention is required. In the example shown above the plating index is 0.30. The blue under-plated area is clearly visible.

These new tools can provide guidance for a designer. We provide the plating image when a new order is placed. This plating image is part of the PCB image – a realistic representation of your PCB that we send out together with your order confirmation. In the near future this plating simulation will become part of the Place Inquiry function. We will run a full battery of manufacturability checks and produce a report. We will also produce the plating image, so that the designer can see if he can make any changes to improve the uniformity of the plating.

After modifications the plating index is now 0.65. The picture shows a uniform plating.

Of course, there may be design constraints which make a less uniform copper density unavoidable. Here we are rolling out a further solution to enhance the quality and reliability of the finished PCB. The Elsyca Intellitool Matrix plating project will further enhance the uniformity of the final plating.

Bow and Twist in Printed Circuits
Scroll to top