Every year a team of students of the Engineering School HELMo (Haute Ecole Libre Mosane) Gramme in Liège, is formed to take part in the European robotic contest “Eurobot”. The name of the team, which decided to compete for the 2016-2017 edition, was “Grammoon”.

To be able to create our two robots, we needed sponsors. Thus, we had the opportunity to collaborate with Eurocircuits to make prototypes and the final electronic cards.

We developed two types of PCBs with Eurocircuits: the first one was used to set the initialising parameters of our robots and to send a signal telling them the game is about to start. The second type of electronic card was very important since it allowed our robots to detect the obstacles and avoid collisions with them.

Indeed, the rules of the Eurobot contest specify that robots must be launched by pulling a cord, which often takes the form of a Jack connection. It is also specified that each team has only 3 minutes to set the robot before the game’s start. During these 3 minutes, the team’s color and the robots’ paths had to be chosen depending on which side we were on the game table.

To respect those rules, we designed a small electronic card we called “Shield Input/Output”.

We put a Jack connection as required for the game’s beginning. We also added some switches to allow a quick set up : one to select the team (a team was characterised by a color and a side on the game table) and three of them which could give us the possibility to choose our strategy. We eventually added two LEDs in order to clearly identify our team’s parameters.

This Shield IO was connected to the brain of our robots, a micro-computer called Raspberry PI. It used the 3.3V and the ground outputs of the Raspberry as power supply.

On the other hand, we had to make sure our robots wouldn’t collide with opponent robots during the game. Therefore we equipped our robots with a detection system based on infrared LEDs.

The goal of this system was to the distance and the angle between our robots and the other team’s robots. With these information, we could react in an appropriated way and avoided collisions.

The data was collected thanks to the emission of an IR pulse by 16 LEDs and the reception of the reflected pulse by 4 IR receptors.

The whole system was composed of four electronic cards:

As we were using the CAN protocol to communicate inside our robots, we added a CAN interface to our receptors. After a CAN-SPI conversion, the information was sent to the Raspberry.

We were very satisfied with the final results and we would like to thank Eurocircuits once again for their help with our project.

Cinégramme, was the 2015 team that participated in the Eurobot competition. Their adventure can be found here.

Be the first to read all about our news and novelties. 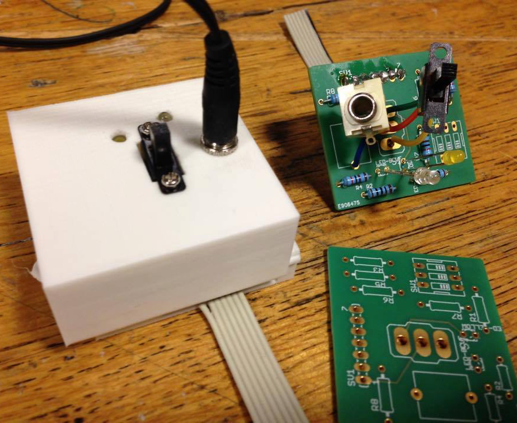