The Academic Motorsport Club Zurich (AMZ) consist of 65 students from the ETH Zurich and the Lucerne University of Applied Sciences, each year they design and build a complete electric racing car as well as, converting an existing race car into an autonomous (self-driving) racing car. 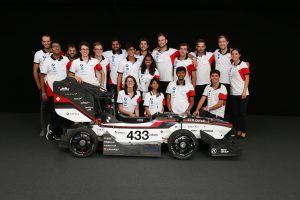 The project is either part of their studies or is realised in parallel to their studies and gives the students, the opportunity to convert the theory learnt in the lecture halls to real practical applications.

For the first time in Formula Student history and during the biggest engineering competition since 1972, the team of ETH Zurich achieved two overall victories. In the electric and autonomous class of the Formula Student Germany competition, they were able to get both AMZ vehicles ahead of the international competition,  consisting of 3,700 students.

In addition to their victories the AMZ team scored 959 points during the Formula Student Germany competition and thus achieved the highest score every recorded during this competition.

What was realised with the Eurocircuits PCB’s:

The contribution and support of, Eurocircuits in this project has played a significant part in obtaining these outstanding results. We thank you very much for your support and cooperation.