In the autumn of 2016, Swissloop was founded as an association by students at ETH Zurich, in order to advance research into high-speed transport systems and to represent Switzerland in the SpaceX Hyperloop Pod Competition. In addition, Swissloop offers students the opportunity to gain practical experience during their studies. With the very first Swissloop pod “Escher”, the team won third place at the Hyperloop Pod Competition 2017, followed by a top ten placement with the pod “Mujinga” in 2018. Targeting the practical solutions for future applications, Swissloop started focusing on the development of pods with linear drives in 2018/2019. With the pod “Claude Nicollier” this technology was used for the first time in a Hyperloop prototype, which reached second place in the Hyperloop Pod Competition 2019. The successful propulsion concept was continued in the 2019/2020 project year: a refined linear induction motor (LIM), combined with the further developments in the other sub-systems, propels the latest pod «S. de Silvestro».

Due to the unforeseen events of 2020, Swissloop decided to set different priorities for its prototype design. From building a top-of-the-line race-winning pod, the goal shifted to research and optimization of Swissloop’s core competence: the design of linear induction motors and all power electronics associated with them. After gaining much insight from the successful design from the previous year, the findings and improvements were implemented in order to arrive at an entirely new architecture. The latest pod features a new double-sided LIM with six coils per side. In order to optimize power transmission from the LIM to the rail, the pod’s inverter was conceptualized and built as a decentralized unit, consisting of independent modules driving each coil pair individually.

On the mechanical side, Swissloop decided to switch from a hydraulic to a pneumatic braking system, improving security and lowering the weight of the entire system. Also, for the first time the shell – the pod’s aerodynamic hull – has been manufactured entirely in-house out of fiberglass reinforced plastic. 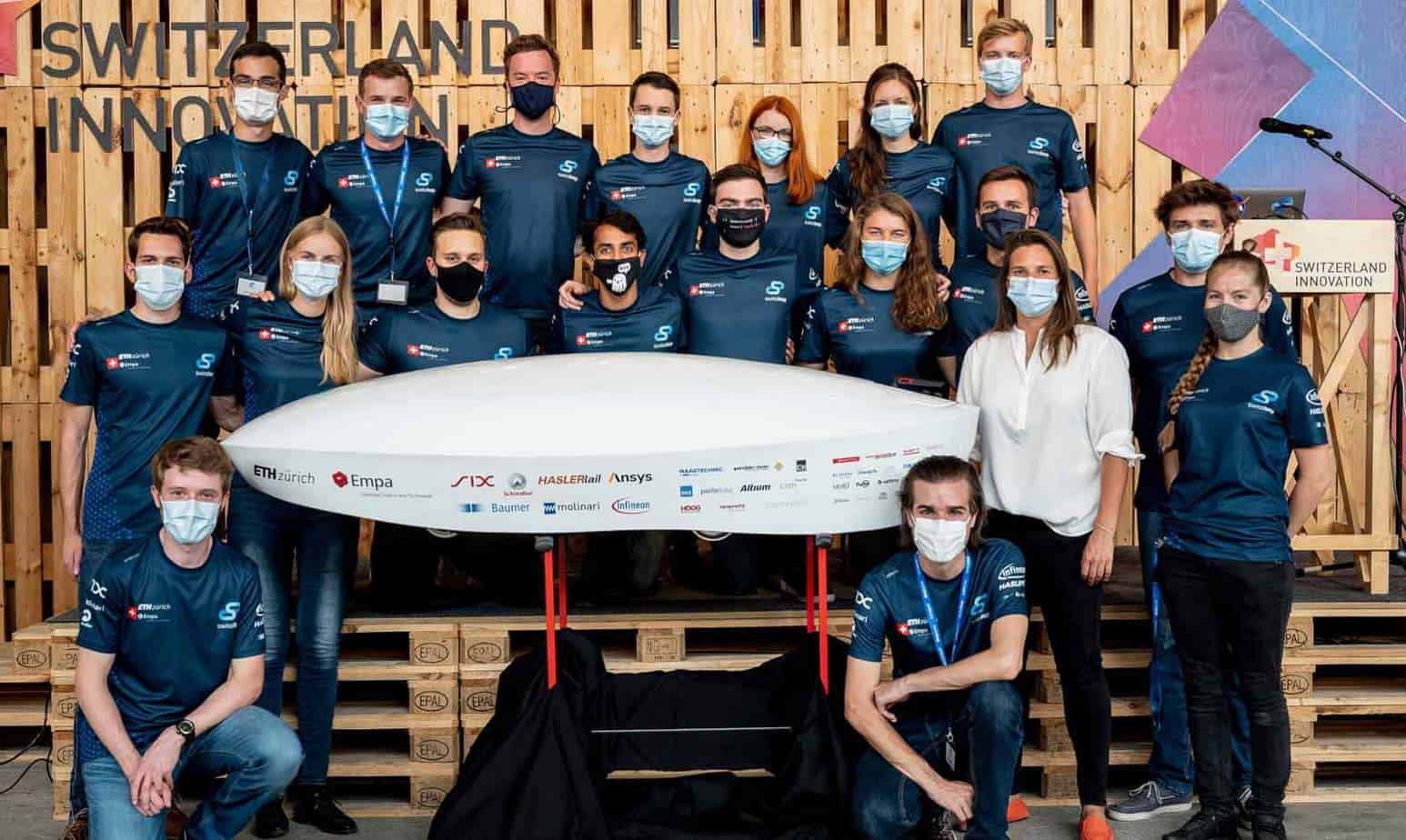 Swissloop’s 2020 pod prototype is named after Simona de Silvestro, Swiss Formula-E race car and Porsche factory driver. “Simona” is 2.05 m (1.5 m without shell) long, 0.8 m (0.6 m) wide, weighs 111 kg and is made from over 3600 individual components. As development started with the SpaceX Hyperloop Pod competition in mind, many components were designed such that they could withstand the high demands of a race. Despite the change of priorities later in the season, many of the initial concepts were implemented in the final pod. For instance, the competition vehicle would have featured two sets of identical braking systems, in order to provide similar deceleration to the much heavier pod. “Simona” features only one set, which reduces the pod’s weight while still providing all necessary insights to validate the concept. Similarly, due to the modular nature of the inverter and the LIM, the current variants of these components are simply scaled down versions of their competition counterparts. Finally, the integration of all systems into the prototype were reviewed, resulting in a compact and efficient pod prototype.

Almost all PCBs on the pod were self-developed by Swissloop and most of them were manufactured by Eurocircuits. Every PCB went through one to three iterations which helped to fix errors and improve the performance. With twelve orders throughout the project year, the quick and reliable manufacturing as well as the fast delivery time of the Eurocircuits service was very valuable in developing the prototype.

The advanced functionalities of PCB Configurator, Checker and Visualizer proved to be very helpful in reviewing the design and eliminating possible errors. The interface is clean, fast and understandable. Especially the marking functionality, which makes it very fast and easy to place logos on the PCBs was appreciated.

Thank you for your generous support!

You can select one or both of the following videos to embed:

The History of the Printed Circuit Board