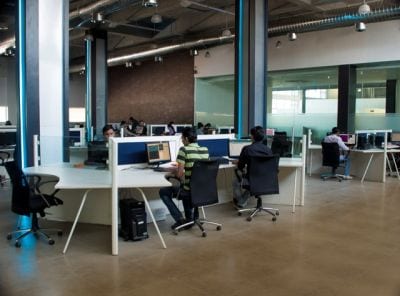 At the end of February I went to visit the new location of PCB Planet.

PCB Planet is the PCB CAM engineering unit serving Eurocircuits . They also serve other board houses in Europe, Asia and the USA. This dedicated CAM unit was set up in 2000 by the Eurocircuits management in Gandhinagar, India.

In Eurocircuits we believe in CAM automation to speed up the data preparation process as well as to guarantee a consistent high quality output level. But the skills and processing power of our CAM engineers remain a decisive factor. The growing number of jobs we process on a daily basis ( more then 300 daily in February 2013) means more workstations and more engineers. The building that we so nicely decorated in 2008 became to small to house alll these engineers in a comfortable way.

Between November 2012 and January 2013 we moved our whole operation to a building in a new industrial site in Gandhinagar.

In this new location there is now enough office space available to accomodate more than 200 engineers, and there is still enough empty space for future expansion.

PCB Planet is now located on the same site where Eurocircuits is starting a PCB prototype production plant for the Asian-Pacific market. The training of new engineers includes an “on-site” training in PCB production technology.

The Teamleaders have their desks between the CAM operators, but there are plenty of meeting rooms available to have discussions.

All work and no play (makes Jack a dull boy).