This is the sixth and final article of this series about PCB design and manufacturing topics. I hope that you’ve enjoyed it and will continue to follow up on our other publications until we return with series 2!

Copper fills — or copper pours — are one of those topics that’s deceivingly simple, but their use requires a great deal of consideration, both electrically and mechanically. How to use copper fills appropriately for high-speed digital design is a complex topic that I won’t even touch here. Instead, I’ll discuss the mechanical and manufacturability considerations.

A copper fill is pretty descriptive: fill an area with copper while keeping a defined distance from other copper features. The copper fill can be connected to a particular electrical net in order to carry and distribute a signal throughout the area it covers; usually those are power or ground but it can be any signal. Other copper features that are part of that same net are connected to the fill with copper, while the rest are not. 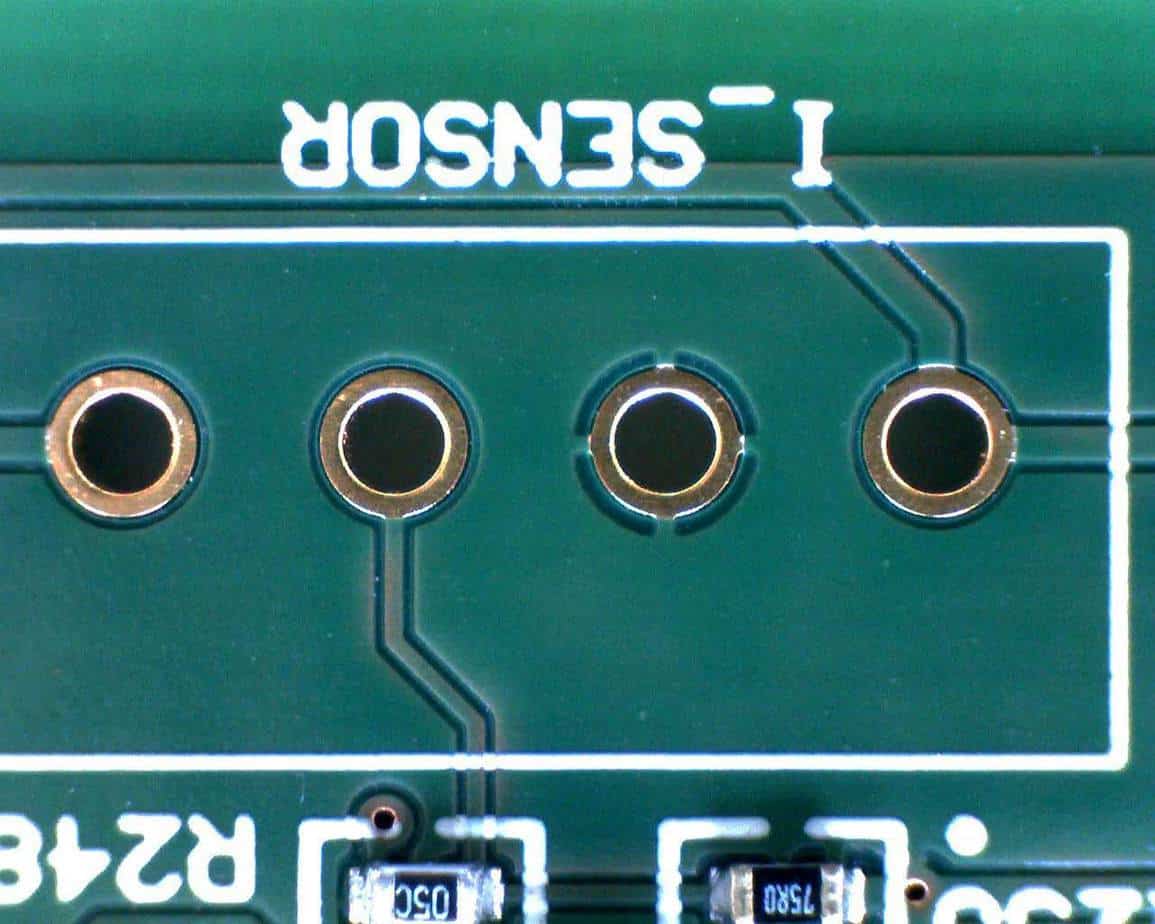 An example of a solid fill where there’s a thermal relief at the hole connected to the fill’s net (third from the left) and tracks going into or out of the holes that aren’t connected to that net.

Copper is a good heat conductor, so any local heating is quickly distributed across it; this means that fills behave like thermal sinks. Sometimes this is desirable, like when dissipating heat from a component’s large ground pad, but it’s not something you want when trying to localise heat onto a pad while soldering. The most common way to avoid that sink is to use a thermal relief where bridging tracks, or spokes, are added between the pad and the fill in order to reduce heat dissipation. That way, more heat remains in the pad for long enough to make soldering easier, faster, and more consistent. 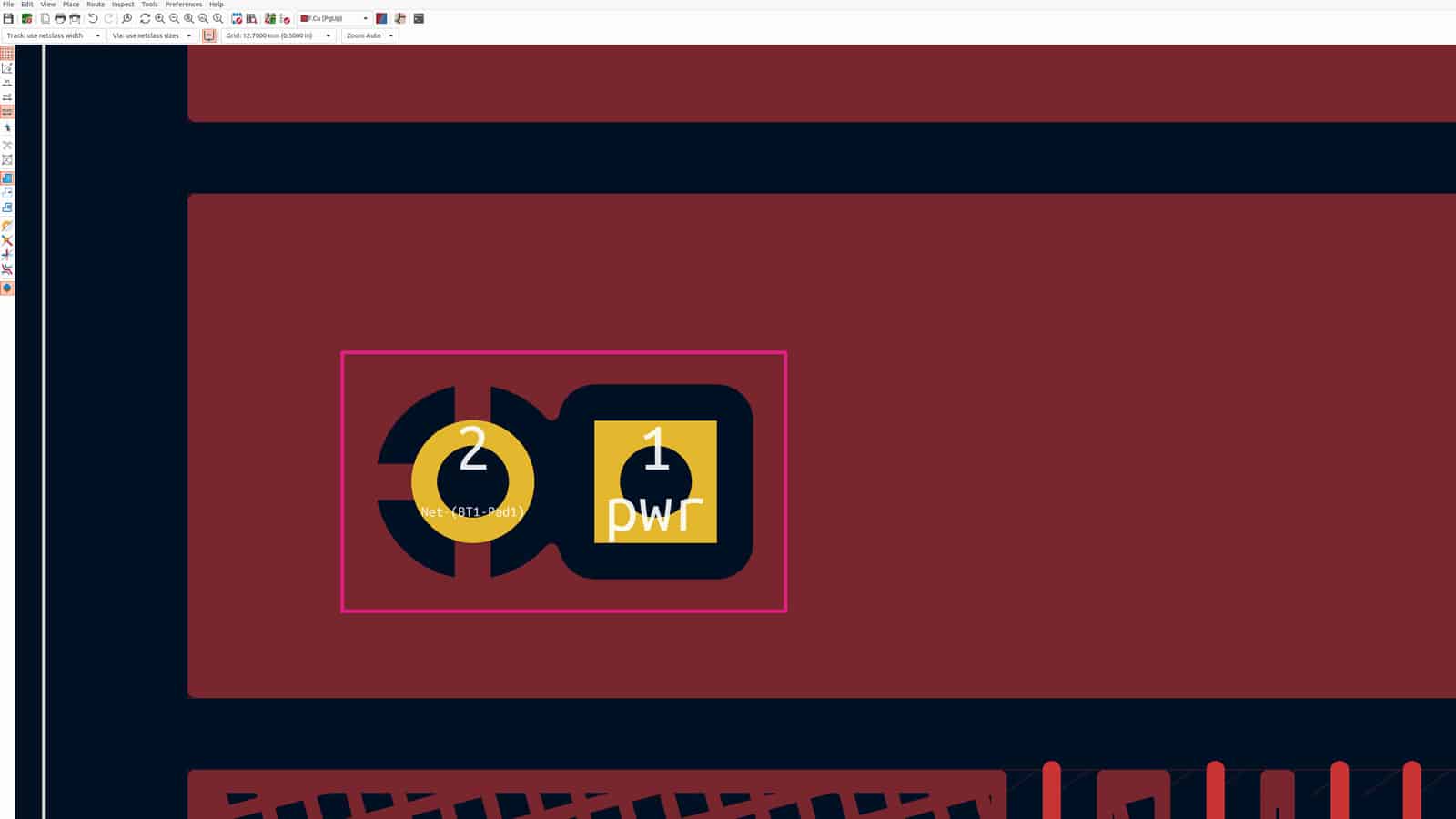 A thermal relief is added to the pad on the left in order to connect it to the copper fill. The pad on the right is unconnected. 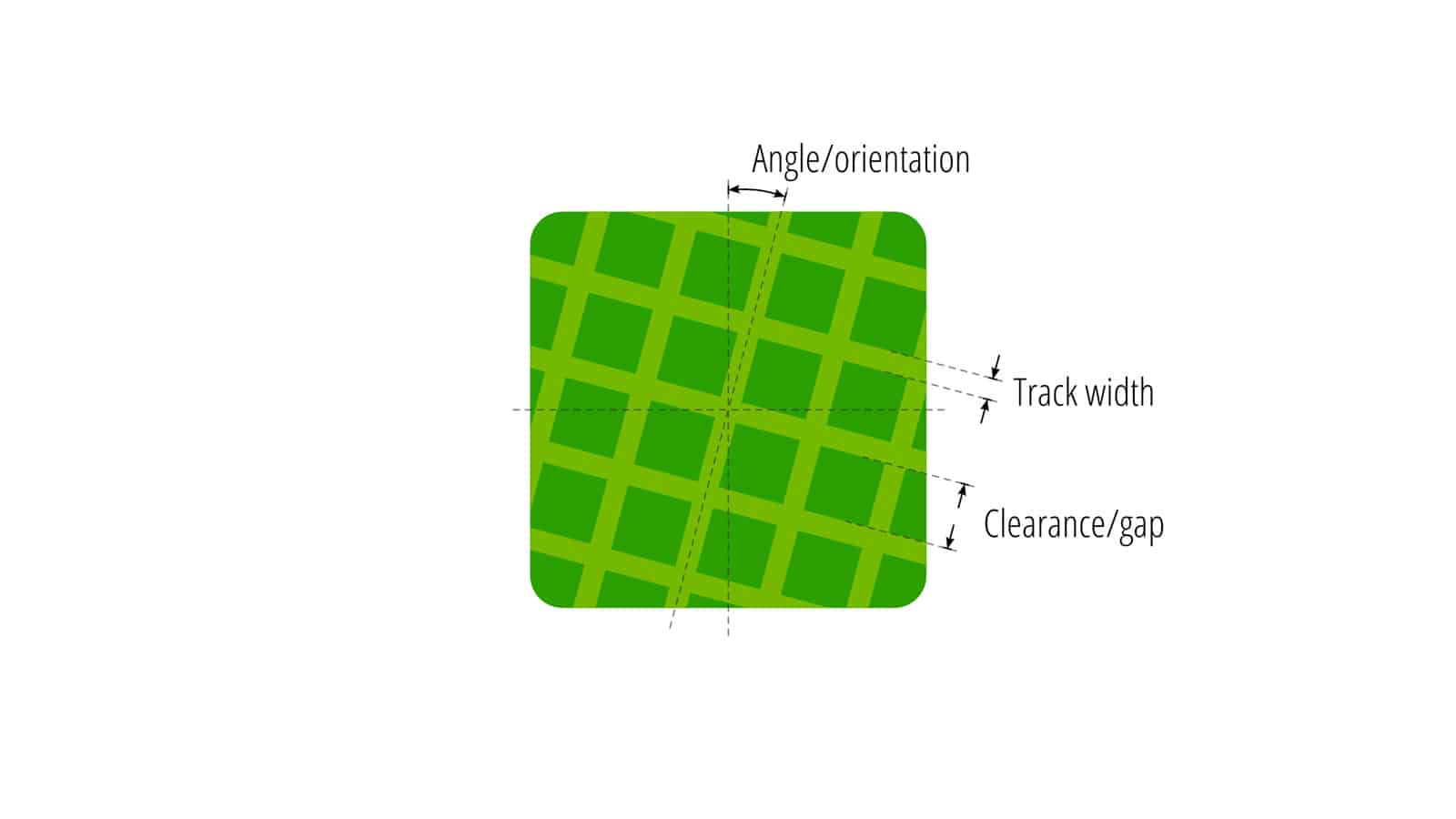 A basic hatched pattern has three properties: track width, clearance/gap, and an angle/orientation.

Design tools normally have two ‘fill’ options: solid or hatched. Solid fills are the most common; calculations for impedance and return paths are straightforward and they do not complicate the manufacturing process as we’ll discuss later. Solid fill should be our default.

A hatched fill pattern on a PCB, with wide gaps that conform to the Eurocircuits specs

In the distant past, hatched fills were often required to help adhesion of copper, resin, and soldermask onto the base material so that they don’t ‘delaminate’ during or after manufacturing. Modern processes do not require hatching for reliable PCB manufacturing, so there is no need for a hatched fill except maybe in some cases listed below. (By the way, if a fab does require hatching, check if they might be using very old equipment and manufacturing processes.)

There are probably more cases, but they’re probably even more esoteric. So stick to a solid fill unless you can really justify using any other pattern. And, as always, it pays to talk to your manufacturer early on. (As a side note, the wonderfully-open-source KiCad’s next release, v6, will add an option for a hatched fill… don’t be tempted!)

The problem with hatched and other patterns

Hatched patterns are a headache for manufacturers. That’s because a lot of verification happens on the data we submit before it goes to manufacturing, and hatched patterns make some of those checks significantly more demanding and time consuming than if fills were solid. 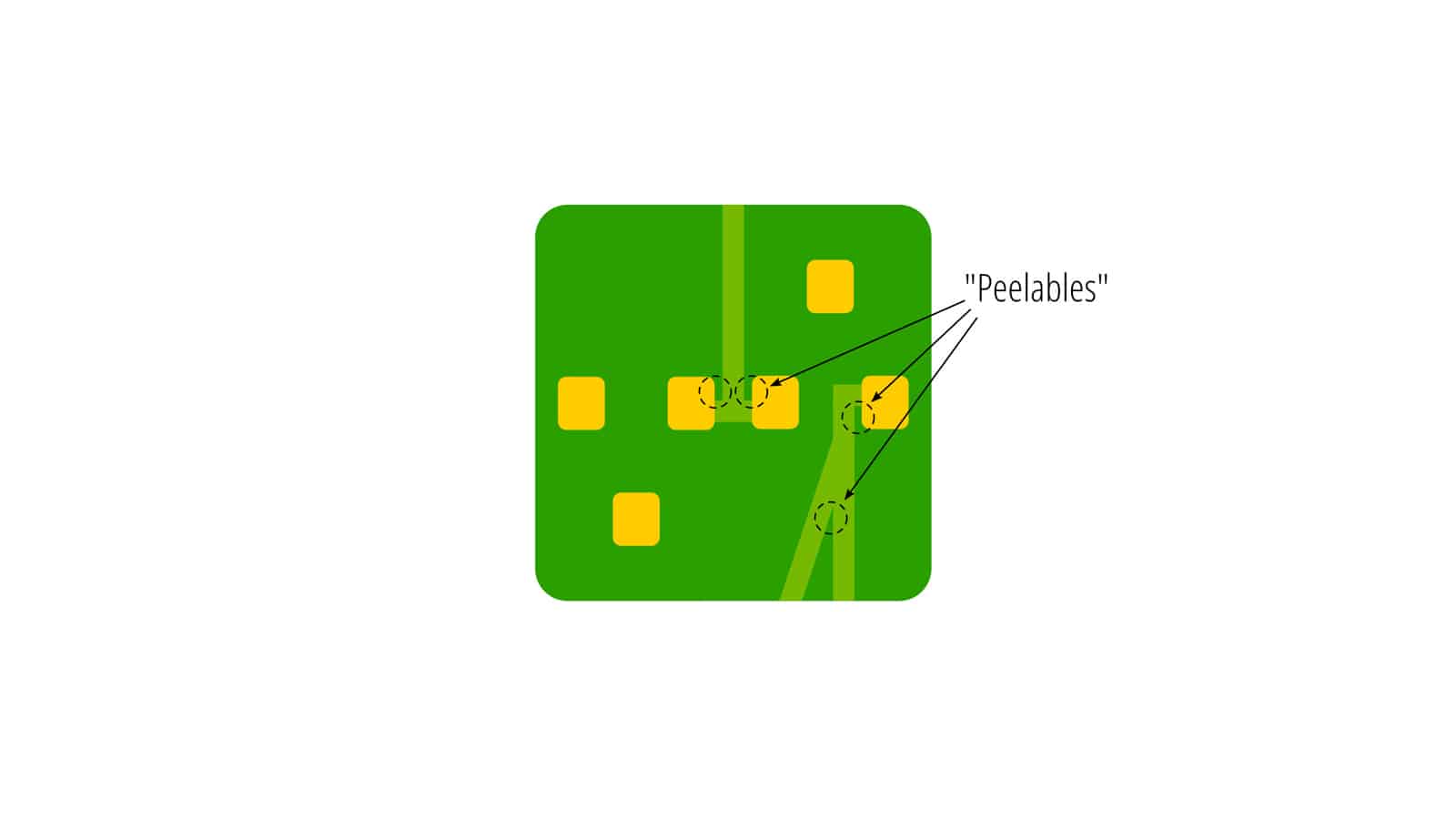 ‘Peelables’ are tiny gaps caused by same-net connections that may cause dry film slivers to fall off and reattach themselves elsewhere and create shorts.

Peelables (not to be confused with peel-off/peelable soldermask) are areas where features of the same net create a tiny sliver or corner. During manufacturing we cover the areas of copper that we want to be removed with dry film, or photoresist. Then we plate the panels with electrolytic copper and tin and etch in treatment baths. If during this process tiny bits of film detach, float around, and reattach themselves elsewhere on the panel they can cause circuit shorts, opens, and imperfections. To help prevent this, we search for peelables and repair them, but with a hatched pattern there can be many more than usual. 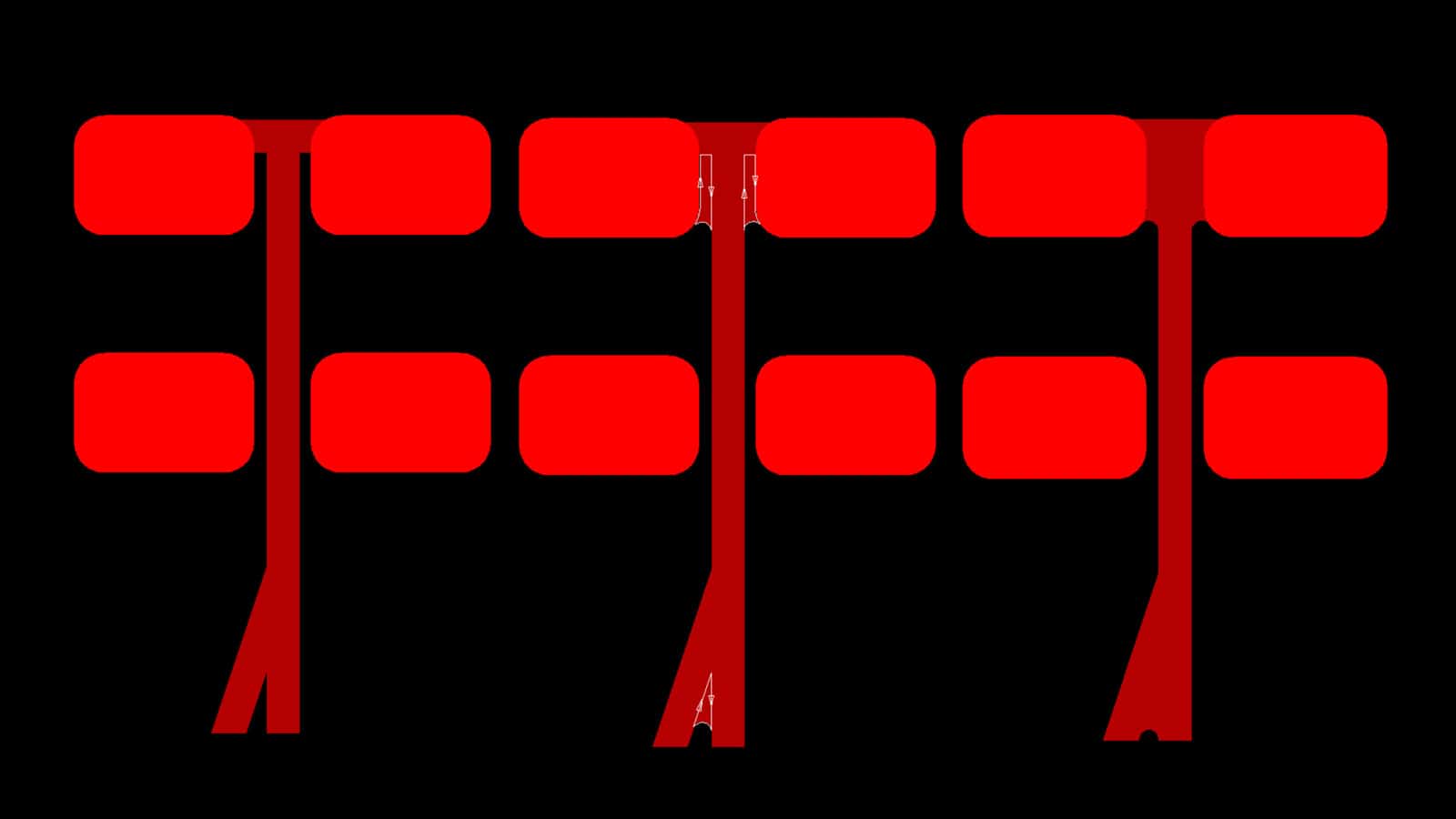 The original design (left) has a ‘peelables’ issue which has been identified (middle) and fixed (right).

Pinholes are tiny holes in what otherwise looks like a solid plain; this is often caused by design tools approximating solid shapes, like a fill, with stroked segments or polygons. As with peelables, these pinholes can cause issues when tiny dry film pieces that cover them detach, float, and reattach elsewhere on the panel. We look for and fix pinholes by ‘filling’ them with copper in the design files. And, as before, hatched patterns have the potential of creating many such pinholes instead of the occasional few with a solid fill.

Performing general DRC on a hatched-filled board is very demanding to verify. Stroked-track distance violations are easy for the tools to find, but much harder to impossible to find if they happen within a single shape. One example of this is what we call copper cuts: tiny connections between two large same-net copper features that aren’t a track; If we don’t detect and fix these, they will be over-etched and disappear.

So while detecting and repairing potential problems with hatched patterns is possible, it comes at a cost in processing time by the CAM software, and the cost of engineers who operate and monitor them. That obviously increases production costs. Some of that higher cost is transferred to the customer, but the primary to the customer impact are delays in processing the data and then fixing it. Ultimately, a good design is manufacturable consistently across several manufacturers, and a hatched fill may introduce too many unwanted variations to achieve that. 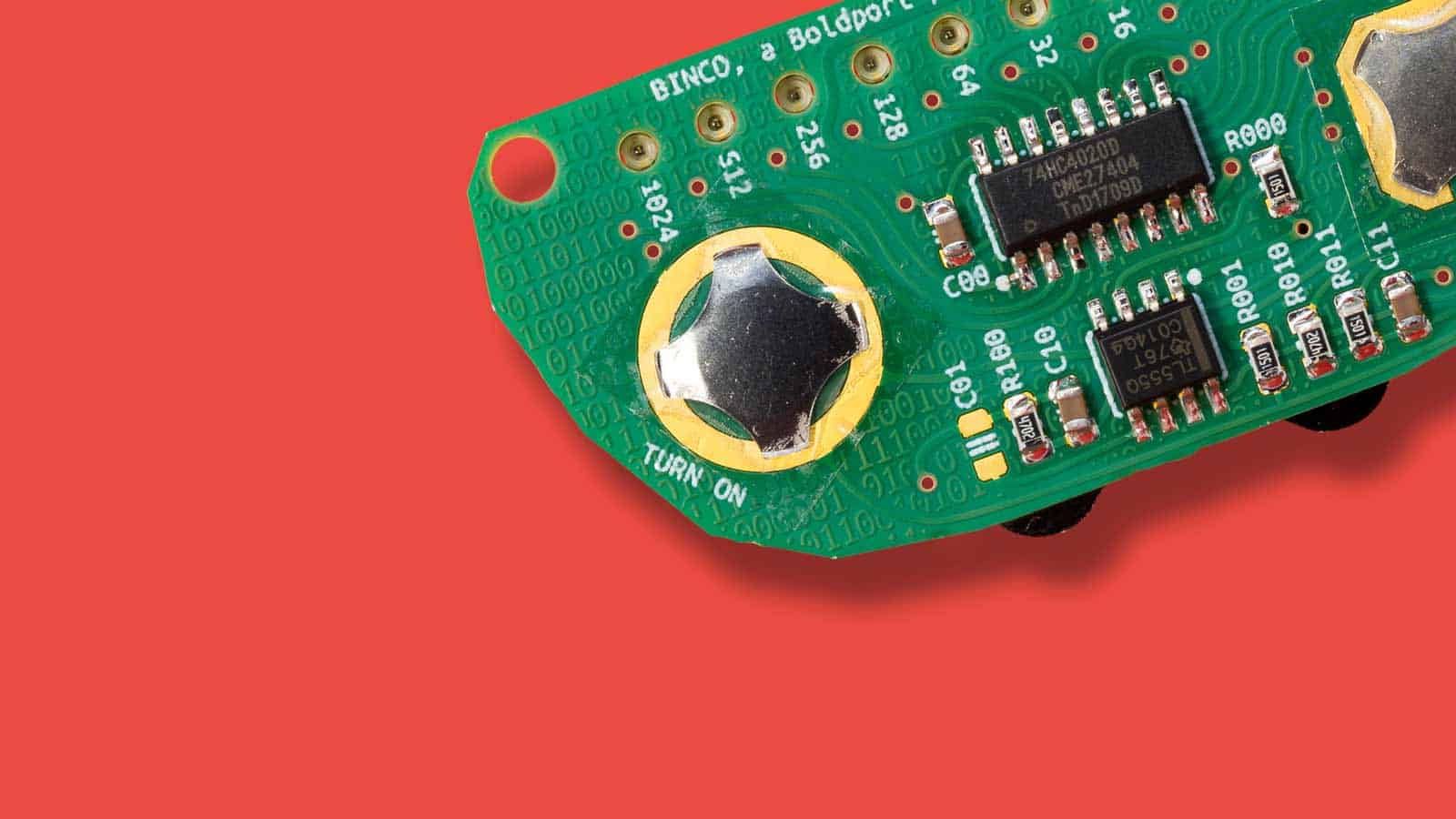 This is BINCO, one of my projects that was manufactured by Eurocircuits. The 1s and 0’s ‘fill’ made the files huge and complex to the point where the Visualizer timed out after a couple of hours. But Eurocircuits were kind enough to not tell me about all the issues that I now know about, or charge me more for it!

How the Eurocircuits way helps

When you submit a board to be manufactured by Eurocircuits our priority is to make sure that it can be manufactured reliably. We go to great lengths to make sure that this is the case so that you get back high-quality boards as fast as possible. To do this we fix problems in the data that we know may cause issues, like peelables, pinholes, and copper cuts. Unfortunately, dense hatched fills cause a lot of these things to happen much more frequently than if they are not used.

All that said, we can manufacture hatched fills if it’s required by your design. They need, however, to meet a minimum density specification:

If the hatched pattern does not meet these minimum requirements it will be converted to a solid fill.

Here are our resources for the specs that are relevant to what we’ve discussed so far:

The History of the Printed Circuit Board
Scroll to top