Who are ETSEIB Motorsport Barcelona?

ETSEIB Motorsport is a team of students, formed by undergraduate engineers at the last grades of their engineering studies. The team has coordinators from the faculty that give support and lead the project. 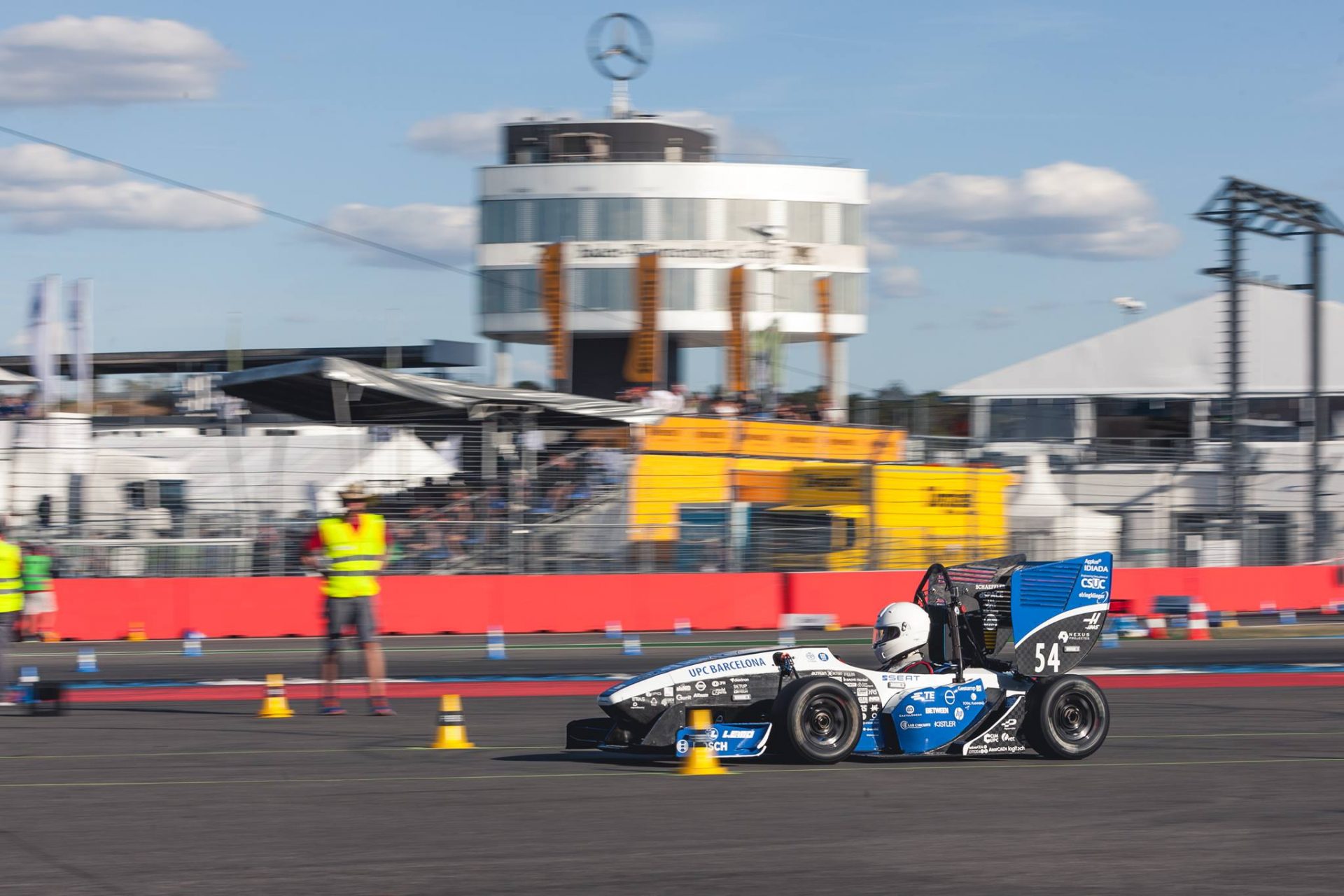 In a electric race car is very important do a great job with the electronic system. We do an accurate job in order to make a safe car. We should design, manufacturing, weld and program PCB’s, Eurocircuits help us in manufacturing phase printing out PCB’s like these.

The Etseib Motorsport Battery Management System is divided in two types of boards: BMS Master and BMS Slave. Eurocircuits provides us the first prototypes of BMS Slaves to test the first design of this board to ensure its good performance.

This board has a LV zone where there is a microcontroller, which communicates via SPI with 4 microchips. These chips can sense the voltage and balance every cell in the car, and also sense 12 point’s temperatures, 4 from the PCB and 8 from the cells busbars. We balance the cells by using 20 ohms resistance so the maximum current used for balancing is 217.5mAmps, and NTC sensor are also included for measuring the temperature of the PCB for safe balancing.

Finally, it’s time to solder it. We place some paste on the PCB pad, place the components carefully over the paste and put the PCB inside the oven to solder it by using several heat treatments. We do finally cover them with coating to protect it from short-circuits. 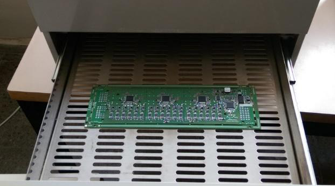 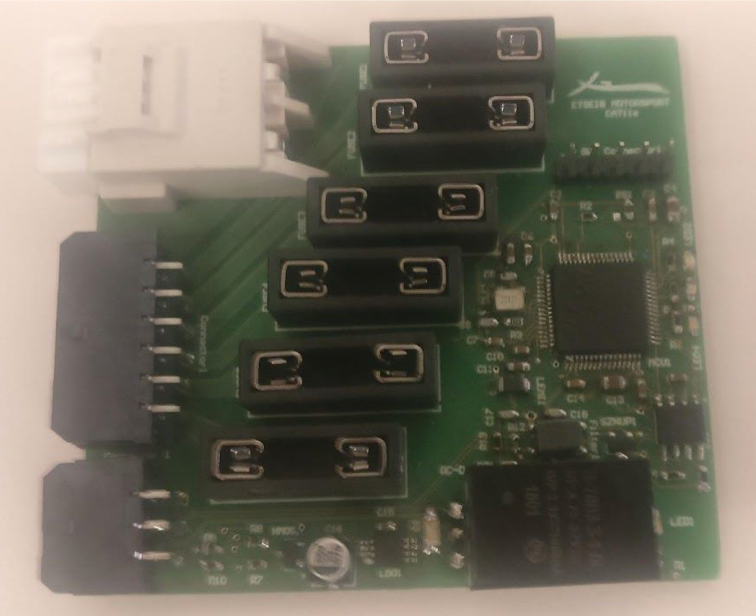 In the Formula Student, the Dashboard is an ECU which works as an interface between the driver and the rest of the car. It contains a group of buttons that allow to start racing as well as changing important characteristics on the car mode and shift between different screens where important parameters of the car are displayed. Moreover, it also controls some LEDs either on the cockpit or the steering wheel to warn the driver about different facts that are important during the different dynamic events. Therefore, in our car, the Dashboard could be assumed as the driver interface controller. 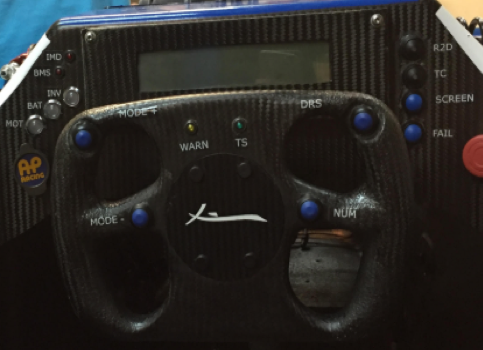 Figure 4: The whole drivers interface controlled by the dashboard

However, without the dashboard PCB it could not be possible to have such a reliable and useful interface that helped our time to understand at any time the car behaviour. 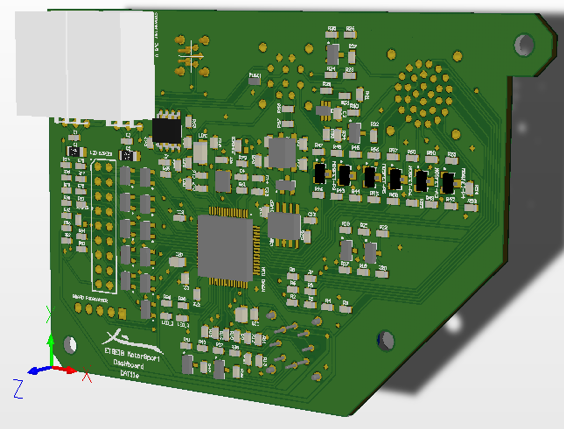 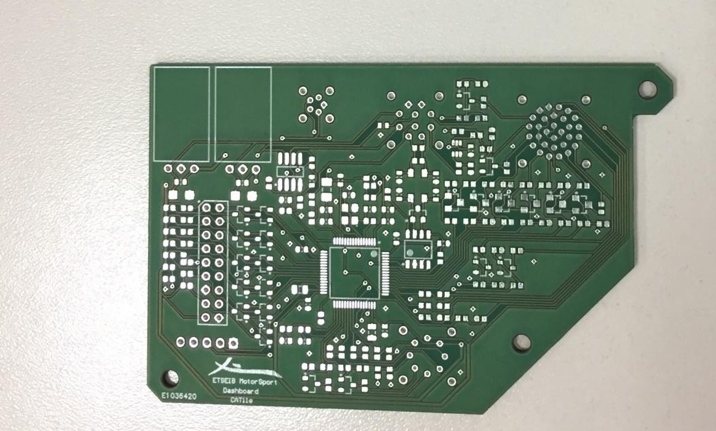 Even though it looks complex and compact, it is based on really simple circuitries and components in order to just control some buttons, LEDs and a display, which are all explained next.

Regarding the buttons, it is interesting to see that the buttons are only based on pull-down circuitries that sends a low signal (0 V) to the MCU and a high signal (3.3 V) to the MCU when the button is pressed.

Figure 7: Buttons circuitries, a simple with the example of 4 out of 8 buttons on the dashboard. 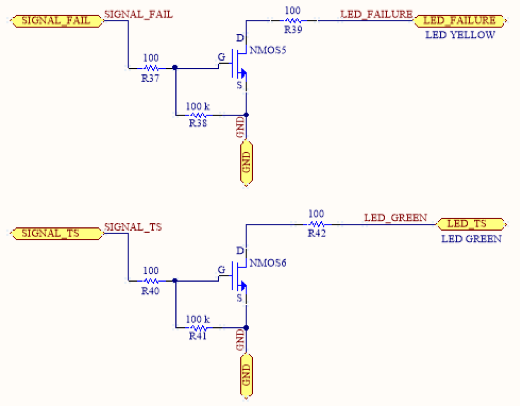 Figure 8: Schematics of the LEDs circuitries.

Finally, regarding the LCD screen, the dashboard was the responsible to send the information to the screen in order to display whatever it was necessary at any time. In this case, the screen had a high logic level of 5 V meanwhile the MCU had a high logic level of 3.3 V. To solve this issue, the dashboard also has hand-made level shifters to translate the 3.3 V of the MCU to the 5 V of the screen. 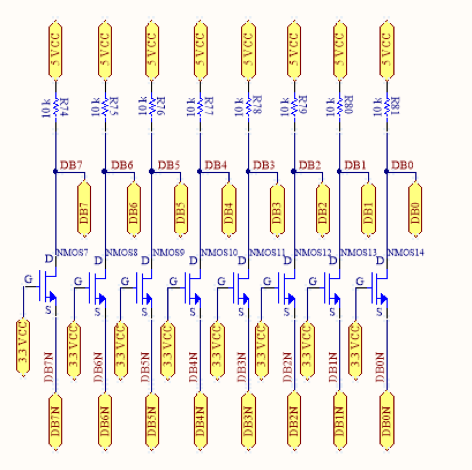 Figure 9: Schematic of the level shifter circuitry used on the LCD screen.

With this circuitry arranged in that way, when the MCU sends a 3.3 V the gate of the MOSFET and the source are at the same voltage level and the MOSFET is not working. Therefore, the pull up has effect and its 5 V signal is sent to the LCD to be recognized as the high output sent from the MCU. However, when the MCU sends 0 V, the gate – source voltage is 3.3 V and the MOSFET is working connecting directly the input of the screen to the 0 V output of the MCU.

Finally, on the testing done in order to check the hardware and the software designed, it could be possible to see that the designed circuitry worked properly and the screen had the suitable information.

Figure 10: Screen controlled by the dashboard.

To conclude, on the electronics and the ergonomics of the car it is important the use of this interface in order to make aware of the driver about whichever dangerous circumstances they can be facing as well as the status of the car. Is for all the previous explained before that we are really pleased to Eurocircuits for the help they offered to us that enhanced the electronic and car performance in such a big way. 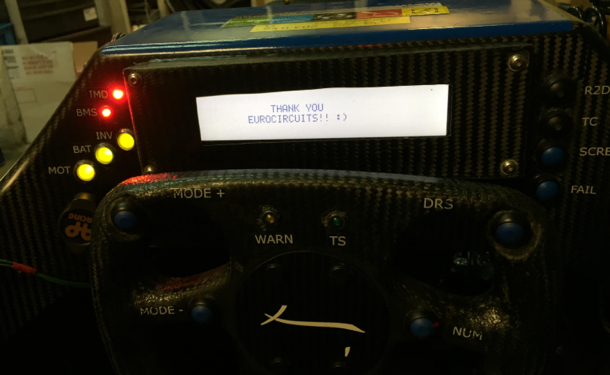 Figure 11: Dashboard in the race car