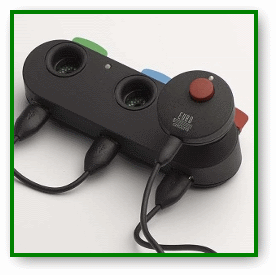 A dedicated docking station holds the 3 Test Heads. It is the fourth smart device of the eC-test-mate.

· The docking station guarantees an insulated connection between your PC and the Test Heads.

The Docking Station is already equipped with the three self-test PCBs, so no further handling is necessary here. Although not recommended, it is possible to remove the self-test-PCBs.

The eC-test-mate Docking Station provides storage, power and self-test possibilities for the three types of Test Heads. The two main advantages of plugging a Test Head into the Docking Station are that the power that can be delivered onto the test pins is increased and that the Test Heads are electrically isolated from the PC. The USB standard of the USB connection on the PC would limit the output current to 500mA which results in a maximum output power of 2.5W. Only 2W would be available on the Test Head when directly connected to the PC.

If connected to the eC-test-mate Docking Station, the maximum power that is available is 7W or 1A output current whichever limit is reached first which doubles the performance.