As explained in our last blog Torus Blog 1, the Torus team from the Collège Saint-Pierre (Uccle), participated in the CanSat project, organised by the ESA with the support of Eurocircuits for the production of the PCBs. The aim of this contest is for the teams (of six teens) to build a small “satellite” in the volume of a soda can and retrieve various data thanks to it. 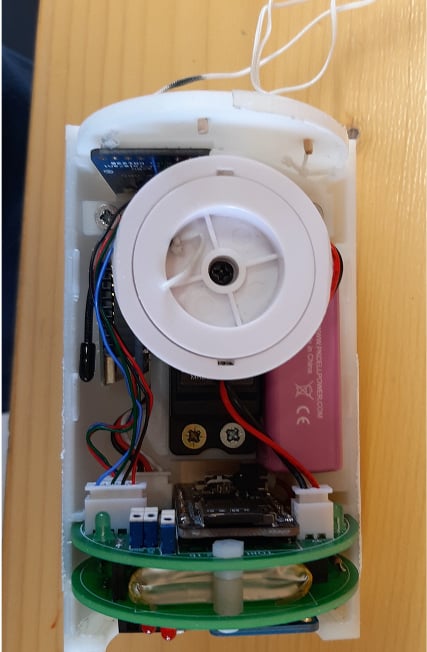 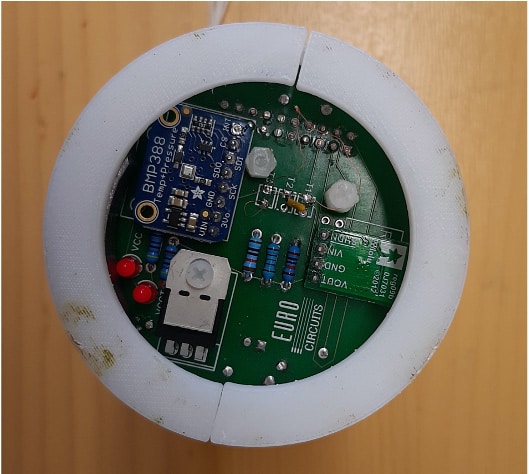 We got selected, after two selections rounds based on intermediate reports, to participate in the launch during the finale of the Belgian in Elsenborn on May 8th, 2021, together with 18 other Belgian teams.

Our team was lucky enough to earn the second place, and this is a summary of our results.

Overview of the Flight

During the flight, we gathered 628 records, for a total flight duration of 25 seconds. Our RF-Transceiver lost the can’s signal 17 seconds after the launch because the rocket was out of distance. We received 80% of the data stored onboard while the RF link was active. During the flight, the rocket reached an apex at 329 m from the ground, 11 seconds after the launch.

This a 3D plot of our can’s trajectory using Google Earth.

The yellow trace represents the path of the can during the flight phase. The black marker, which is about 1.5 km away from the launch site, represents the last data point that was successfully received by radio.

A few seconds later, the can got ejected – at only 190 m above the ground which is much lower than the expected 1000m. Finally, in purple, you can see the landing spot.

For the primary mission, we gathered temperature and pressure data. From the pressure data, we could derive the altitude data.

This is the temperature data collected by the BMP sensor and our 3 thermistors. The response time of our thermistors is, as expected, much better than the BMP’s. In less than 3 seconds after ejection the readings of our best thermistor (blue curve), reaches the actual air temperature and then increase again as the can descends. 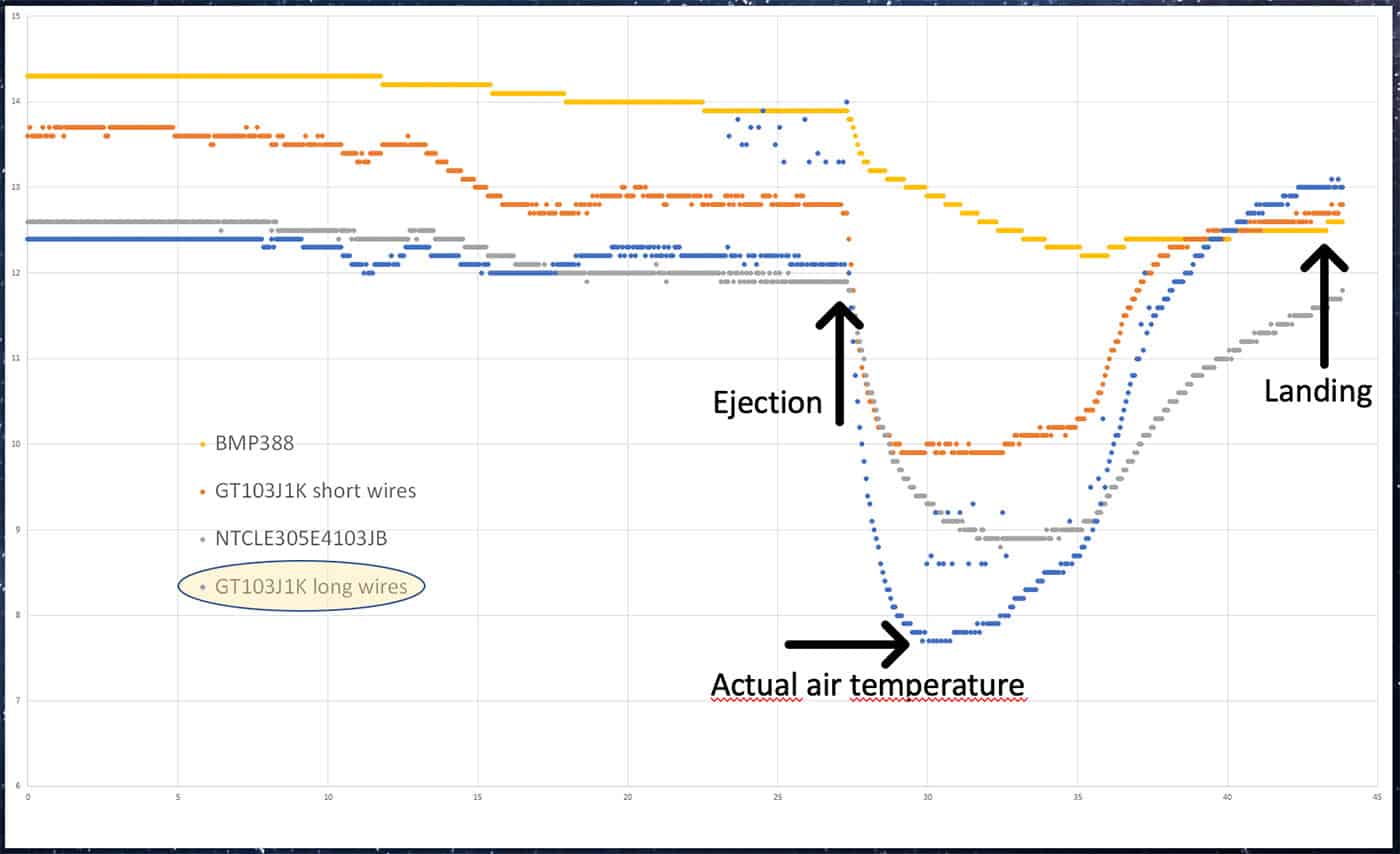 There were some instabilities. The first group is easily explained by the turbulences when the can casing opens before ejection, the second is less clear (possibly an inhomogeneity in the atmosphere).

Here is the raw pressure data as a function of time as collected every 70 msec by our BMP388. 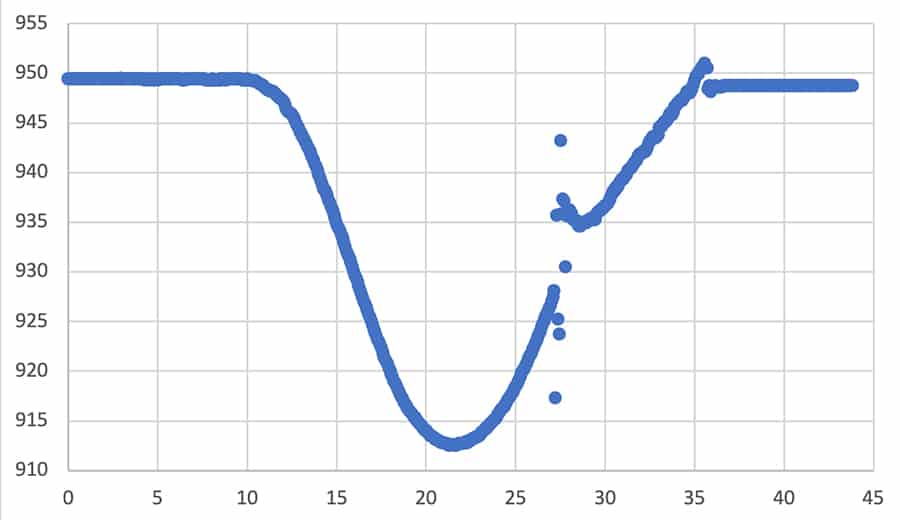 The pressure first drops as the rocket gains altitude and then lifts again as it should. 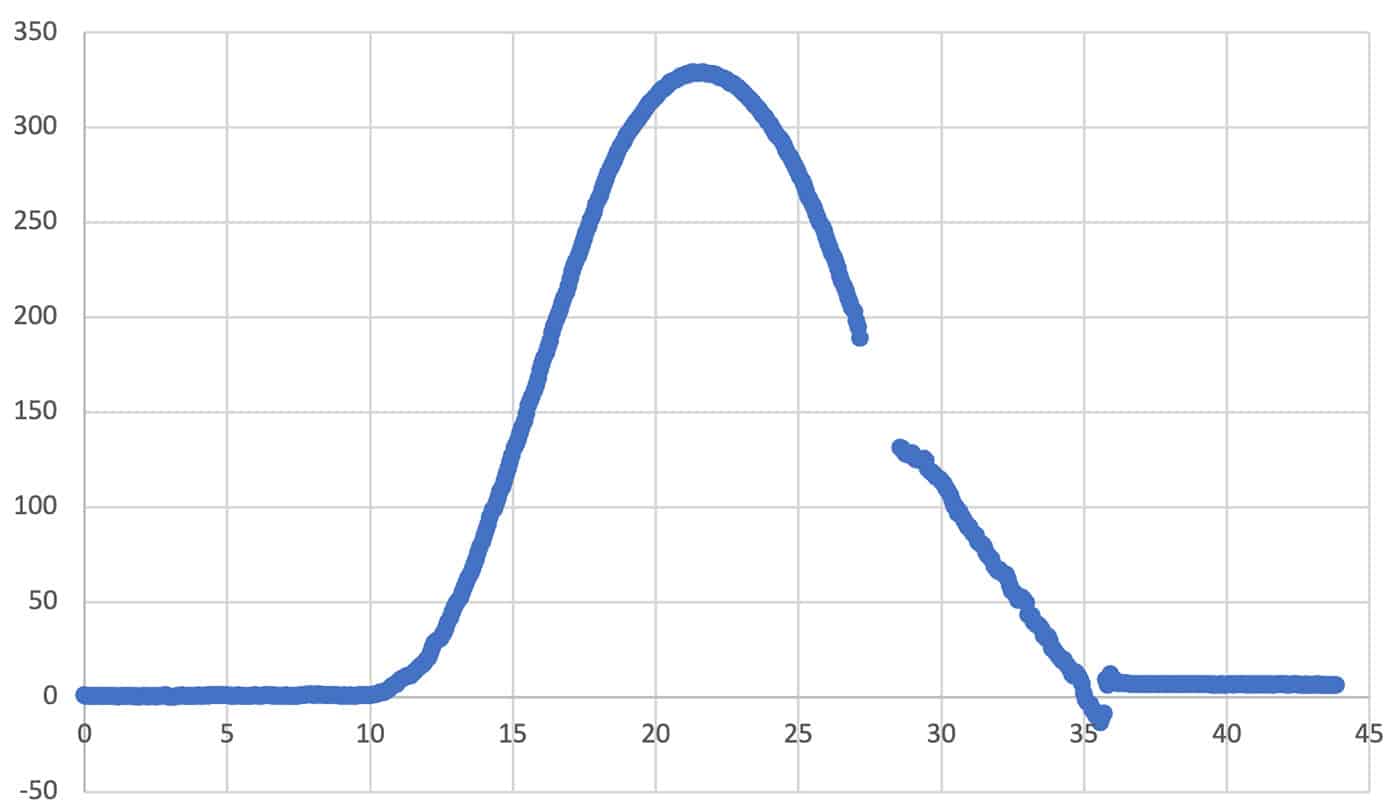 As you can see on the graph which is based on the pressure data without irrelevant values, the rocket reached an apex of around 329 meters before falling. The reason for the discontinuity at touchdown is that we calculated the altitude directly from the pressure. So, at the touchdown, the excess of pressure due to dynamic pressure cancelled, which results in this apparent change in altitude.

After ejection our descent velocity was stable but out of rage (20 m/s) due to our parachute issue (more on that later).

During the flight, we wanted to see how the parachute shape (which we could change using a servo) influenced the descent velocity. We unfortunately couldn’t collect meaningful data for several reasons:

Nonetheless, the can piloted the experiment exactly as expected in those circumstances: 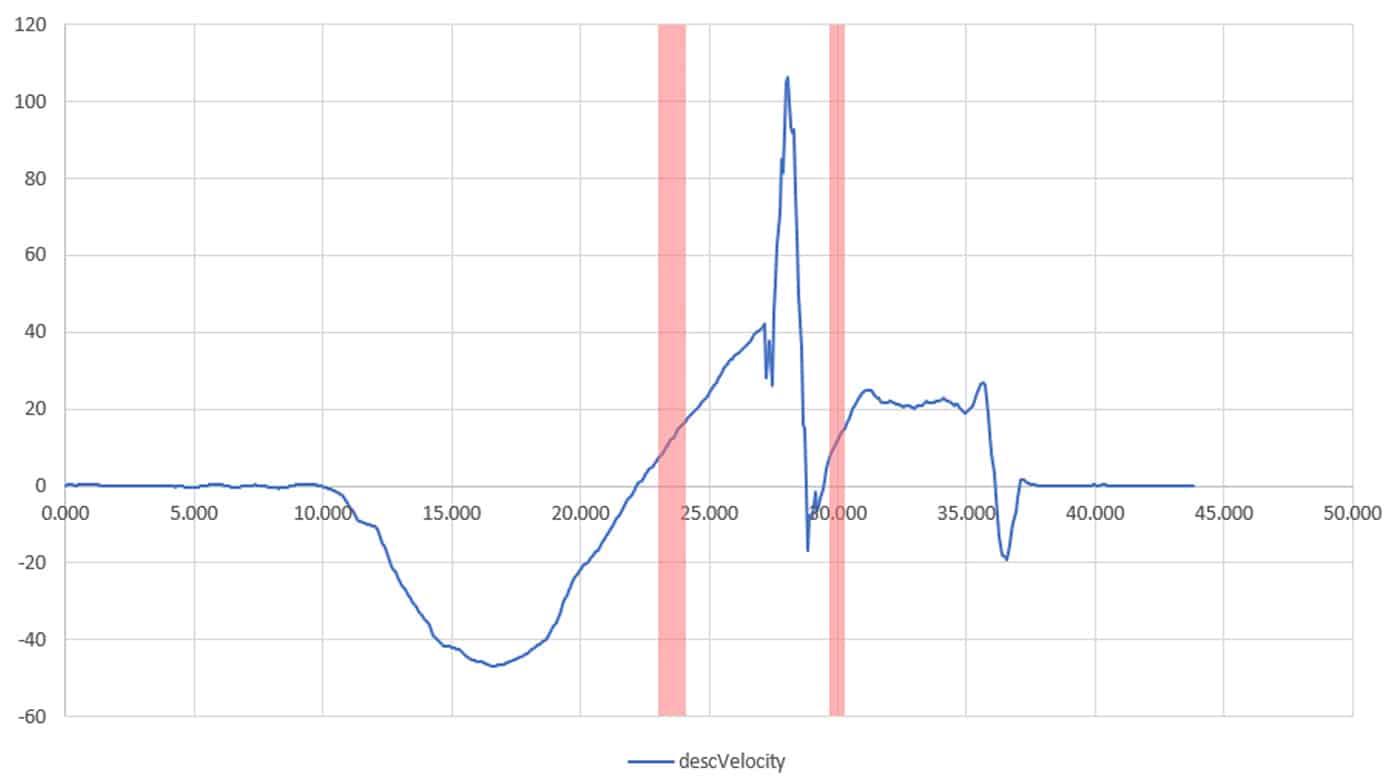 When we recovered our can, we saw no part had been damaged. Everything was in a perfect state besides the parachute, and this is clearly partly due to the use of a PCB rather than artisanal circuitry. We are very grateful for Eurocircuits support in this matter.

This project proved that our architecture and design were adequate, but that we still have to improve the quality control of the implementation of our parachute:

We’ve also be able to involve many people in our project inside and outside our school, and hope we succeeded communicating and sharing part of our enthusiasm for science projects. 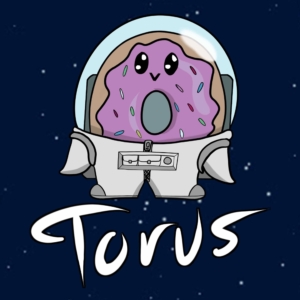