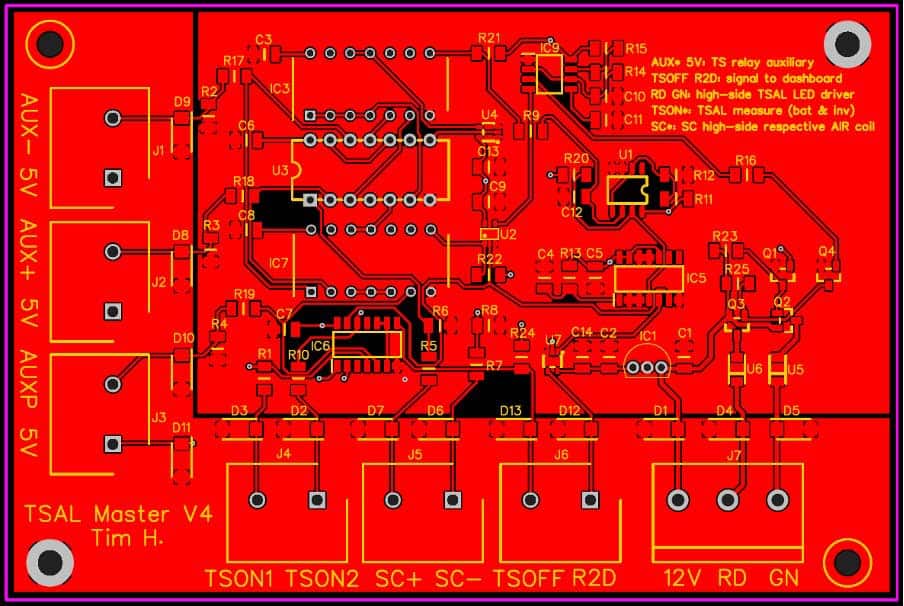 The Hanze Racing Division (HARD), a Groningen-based student team, is currently working on its first electric car and intends to participate in a Formula Student competition in summer 2021. Formula Student is one of the most famous motorsport design competitions for students and this time HARD decided to join the competition of electric cars. To build the electrical systems of the car, HARD’s Electrical Team has been working on its own printed circuit boards (PCBs) which compose a large part of the electrical system of the car.

How do they do that? The first step in designing PCBs is to do background research and read the Formula Student Rules in order to understand the circuits’ requirements and restrictions. The rules specify the functionality of the circuits and in some cases the competition even presents their own example schematics of some PCBs needed, which can serve as a base from which to improve or adapt in order to produce the best schematics possible. Hence, even though some base schematic is sometimes available, the team still needs to put work into it.

When the schematic is ready, and suitable components have been chosen, it is time for step two: simulating it. The engineering student simulates their own schematic, looking for mistakes and fixing them before continuing the process. Once the simulation is successful, the next step is to design the PCB. For the design, the layout of the components on the board should be done very carefully, keeping the connections between the components in mind. The mindful layout of the components will make the next step of routing the traces much easier. Some extra rules should also be considered to ensure good electrostatic discharge (ESD) protection and ground connection. Additionally, the designs should include ground planes and power planes (five or twelve volt) to reduce voltage drops and to reduce electromagnetic interference.

Once the design is ready, another member of the team will evaluate the design in order to find issues that the designer might have missed. This way, the team ensures that at least two members agree on the best design possible before ordering the boards. Then a bill of materials for all components will be compiled. At this step the team makes efforts to reduce the number of different components for all boards and makes sure that the components meet the specifications of the boards that they occur on. After the bill of materials is compiled, the team can request the boards to be produced by their partner @Eurocircuits. Once the components arrive, the members can solder them in-house and then test the boards to make sure they work. In case a board is not approved during the testing session, the student analyses what went wrong. Was it a soldering mistake? Is there a faulty component? Or was there a flaw in the design? When they figure it out, they fix the problem and try again until the PCB is approved and ready to be installed. 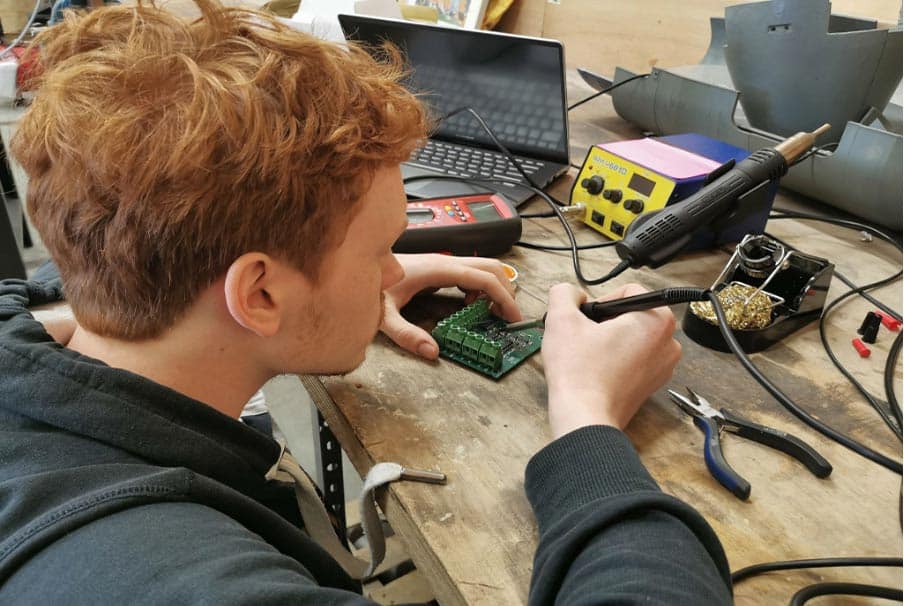 Tim is working on the TSAL Master Board

The electrical team has 7 active members which are in charge of designing and producing around 15 PCBs. One of these members is Tim Heubner, a second-year student of Electrical Engineering with an emphasis on Sensor Technology. He has been working with HARD for over a year, on several different PCBs. For example, on the latching circuit, the brake system plausibility device (BSPD), and the tractive system active light (TSAL).

The latching circuit will shut down the car if it notices that there’s an error signal from either the battery management system or the insulation monitoring device. This is done by interrupting the shutdown circuit, which is a circuit designed to shut down the whole car. Secondly, the brake system plausibility device detects if the brake and the accelerator pedal are pressed at the same time, which is not supposed to happen. But if it does occur, the device will also interrupt the shutdown circuit and therefore shut down the car. And lastly, the tractive system active light’s PCBs keep track of whether there is high voltage (450V) on the car. In short, if the high voltage is being delivered from the 450V batteries to the rest of the car, an indicator light at the top of the car will then turn green, red, or off, depending on the situation.

So far, Tim’s favourite PCB design is the TSAL since it was the most complex one that he has worked on. It contains a lot of digital logic and it receives many signals. “Just understanding how the circuit works and what it needs to do was quite extensive work. Even after I had been working on it for a few months, there were still sometimes when I had these ‘aha’ moments. And that was really a lot of fun!” said Tim.

Furthermore, members like Tim can put into practice the experience gained in HARD and develop a better understanding of concepts that they learn about in their studies. During the PCB design process, “you will learn a lot about Ohm’s law, you will understand impedance better, and you will become familiar with a lot of different components like op-amps and MOSFETs”, explained Tim, “we learned about those things in class, but I didn’t really think I would actually ever use them. But then I did and it’s pretty interesting”.