In today’s discussions the word mobility is a hot topic. Everyone aims to get from point A to B as quickly, easily and affordably as possible. While we focus on these three elements, we forget that the current form of mobility does not yet meet the daily needs for everyone. Especially when you are in a wheelchair. Project MARCH wants to change this. We believe that technology can improve the quality of life of people with spinal cord injuries. We do this by designing and building a prototype exoskeleton each year. An exoskeleton is a motorised robotic suit which allows people with a spinal cord injury to stand up and walk again. The team consists of 26 students with various backgrounds who put their study on hold for a whole year to work on the project. 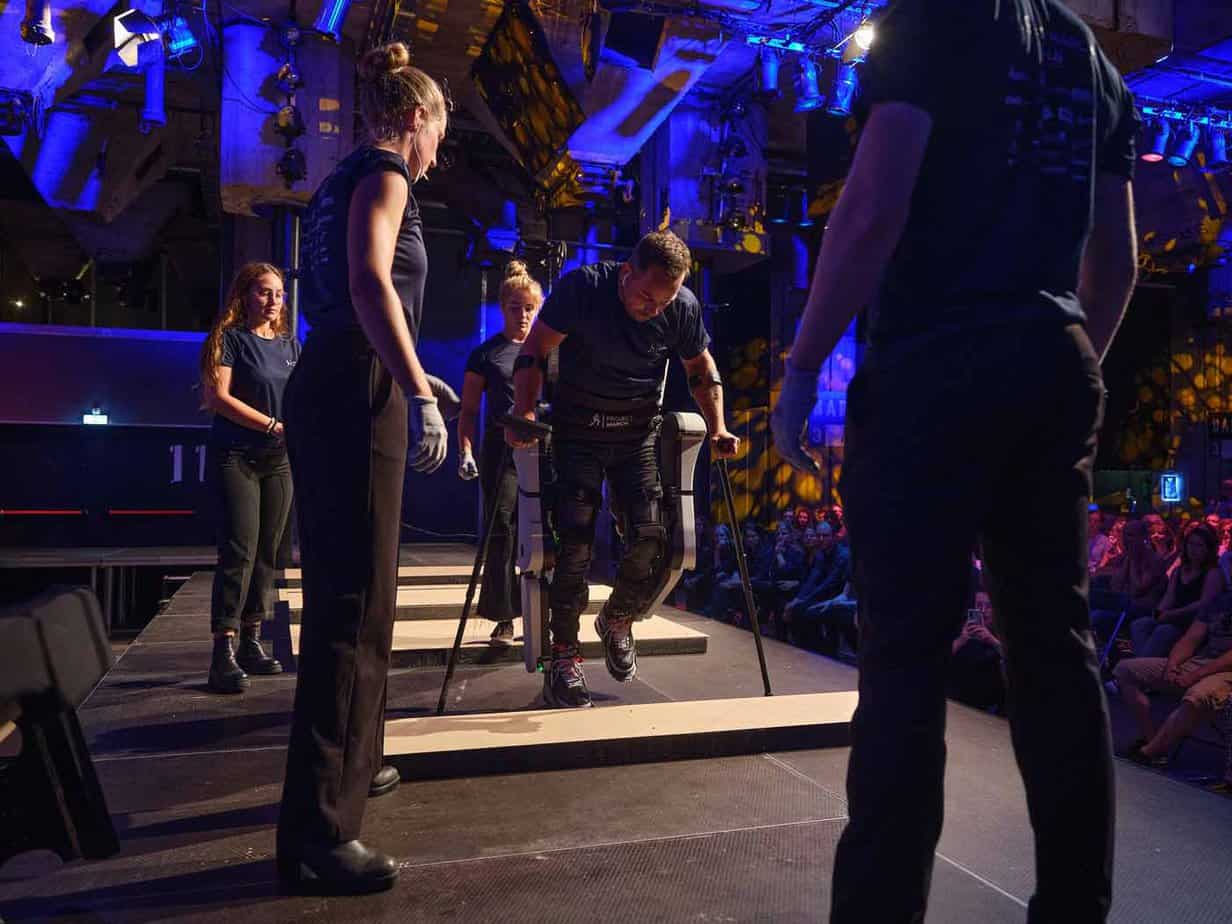 This year we wanted to take a big step in the exoskeleton technology. We aimed to dynamically walk a pedestrian route with our exoskeleton. We are happy to say that we achieved this goal on the 19th of August during our Exoskeleton Reveal. Our pilot, Koen, tackled various obstacles. Furthermore, we managed to let Koen walk with a Brain Computer Interface. This is a head mounted device that monitor’s Koen’s brain waves and determines if he wants to walk or not. This technology is beneficial as it makes the experience of using the exoskeleton more intuitive. By only thinking about walking, Koen is able to control the exoskeleton to make it walk.

We could walk dynamically because of the use of three 3D depth cameras. These can be seen as the eyes of our exoskeleton, the MARCH VII. Two depth cameras are aimed to the front and one to the back. The two to the front scan the surroundings of the

exoskeleton thus adapting the step size of the exoskeleton so that every kind of stairs, ramp or curb can be overcome without needing to stop first. The depth camera in the back is for scanning the height of different kind of bench so that our pilot and the MARCH VII can sit everywhere!

One of them is the Power Distribution Board (PDB). As the name suggests the PDB is responsible for distributing the power, which is supplied by the battery, to all the electrical components inside the exoskeleton in a safe manner. Since not all components need the same voltage the PDB contains several power converters to convert the 48V delivered by the battery to 12V, 5V and 3.3V. One of the Electrical goals was to improve the cable management in the whole exoskeleton. Therefore, the connector placement was designed to make sure all the cables were placed in the most efficient way. A hot swap controller was used to prevent high inrush currents. The safety of our pilot, Koen, is an important aspect in our design process, which is always considered. Temperature sensors were added for temperature control with fans in exoskeleton. This prevents the exoskeleton form overheating thus making it safer for the pilot to use the exoskeleton, the MARCH VII. Another addition is a SD card port. This allows us to use store extra data used for troubleshooting

One of the improved PCBs that Eurocircuits produced for Project MARCH is an Ethercat slave used to communicate with the motor drive and other sensors around the actuator. The data lines were changed to use differential signalling to make them more resilient against noise. Furthermore, the temperature sensors which measure the motor temperature are greatly improved in terms of accuracy and noise resilience. To include the sensors, circuitry has been added to the board read these out. Finally, an additional power stage was added to the dc/dc converter to power some additional surrounding electronics which made it possible to remove a power line from the leg. Even with these improvements and additions, it was possible to slightly decrease the package size of the board which is crucial to make sure it fits the tight margins of our exoskeleton.

These PCBs were designed using Altium. Thereafter, the designs were sent to Eurocircuits who reviewed and fabricated them. Their production process is fast and intuitive. 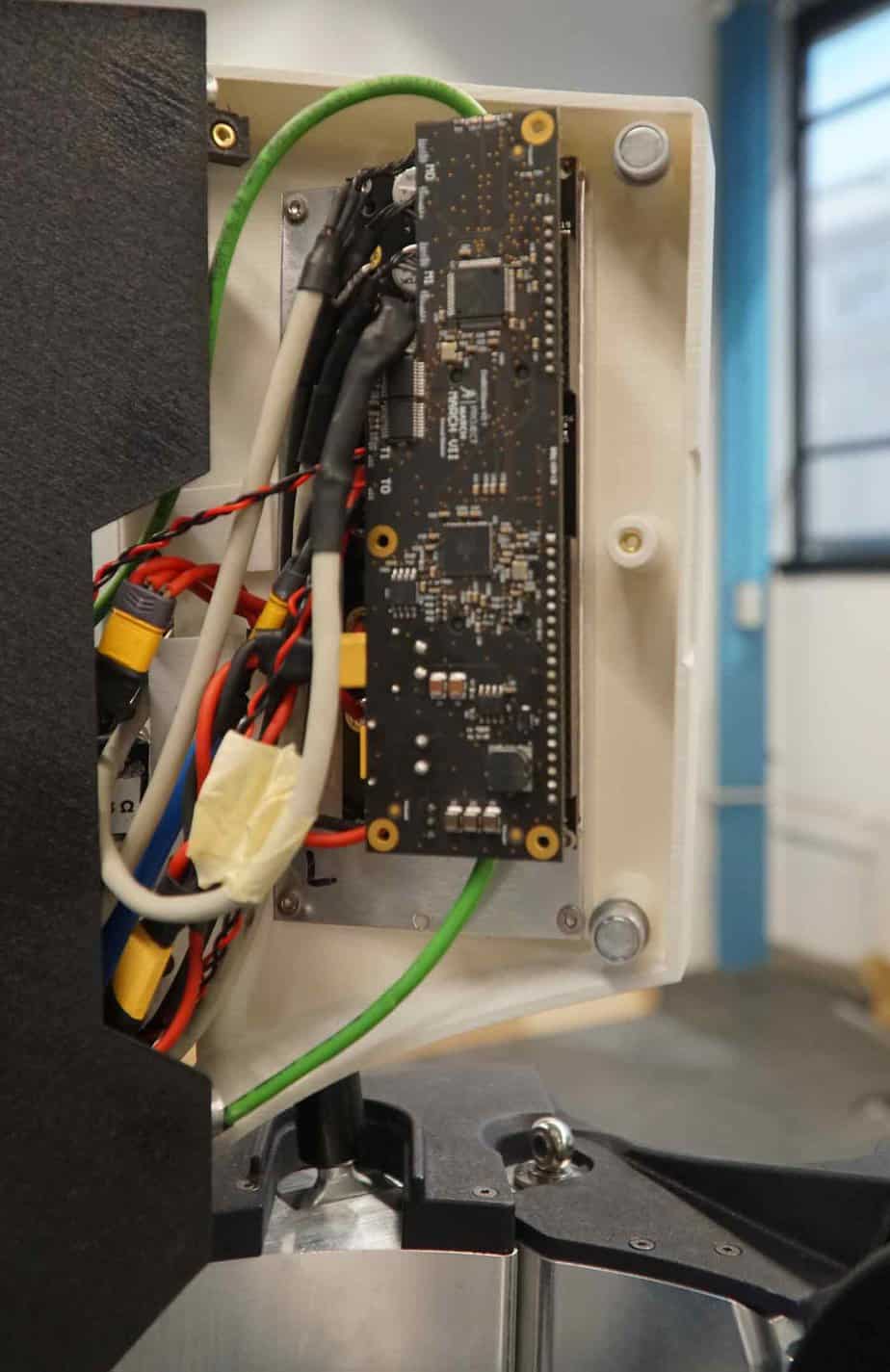 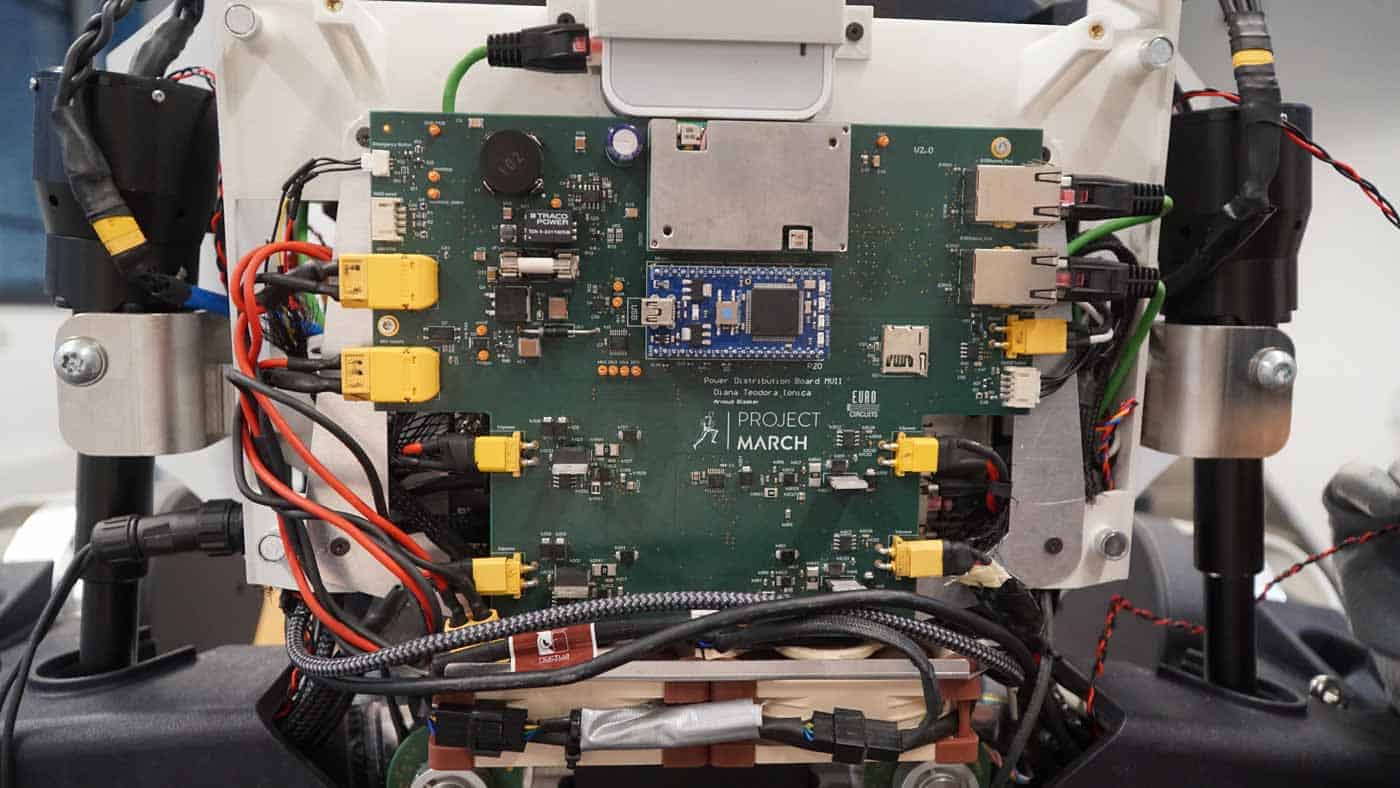 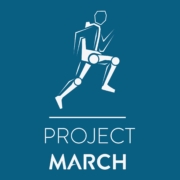 For more information, check out the Project MARCH website.