VUB Racing: BMS Board and KiCad

VUB Racing is a Formula Student team from Brussels.

This year marks our fifth year competing in the electric vehicle category of the formula student competition. Our team operates on a ‘Built not bought’ philosophy.

We try to build as many parts of the car ourselves. This year we built 2 new electromotors, every part (besides the magnets) is self-made, even the winding of the spools. Additionally, there are many different electronic systems that must be built.
This is where Eurocircuits comes in to play. They’re a joy to work with because of their reliability and extremely quick shipping times.

This semester we improved upon our BMS design and switched to a new software tool called KiCad!

In Industrial Sciences at the Free University of Brussels everyone starts out their PCB adventures with Altium Circuitmaker. Because the vast majority of our team is familiar with Altium software we’ve used the more professional Altium Designer for PCB design in all 5 years of our teams’ existence. It’s awesome software with many advanced features. It’s a well adopted and respected tool in the business space.

With great power comes a learning curve. Even with everyone used to Altium products, Designer is complex software that needs to be learned. Our team consists predominantly of automotive and aerodynamic engineers. However, in a modern vehicle, the reality is that every member of our team will need some kind of electronics. This could be a test platform that automatically logs data, a motor driver or just some fancy LED’s.

It’s an awesome project that’s been acquiring a large number of happy users within the last few years. For business solutions Altium still has the largest market share, but KiCad really has been making some engineers rethink their software choices. Additionally, Eurocircuits natively accepts the default KiCad PCB file type, no Gerber files are needed! Moving to KiCad has removed a lot of friction for non-electronic minded people to make PCB’s. While still providing plenty of advanced features for the necessary cutting-edge work.

Tinytemp, is a small and elegant test project to find out how well KiCad can replace Altium Designer in our complete schematic to physical PCB workflow.
The circular board with a radius of 1 cm, consists of an ATTINY85, a display and some kind of sensor. Any basic sensor can be used but here a common LM35 temperature sensor was used. 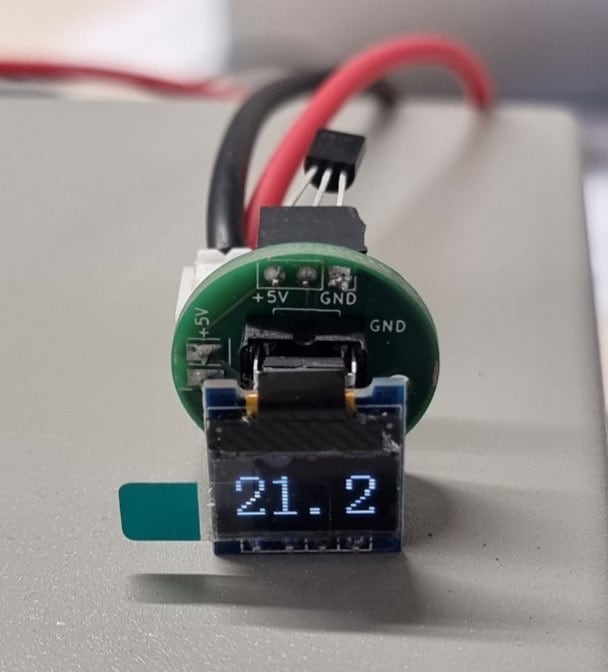 It’s nice to see that Eurocircuits doesn’t just excel at large complex boards but that their attention to detail also translates amazingly to these smaller compact PCBs.
This small test project won’t go to waste! It will be used as a 3D printer chamber temperature monitor. Really useful when printing engineering grade materials.