The differences between reflow ovens explained

The cheapest solution by far for reflow soldering boards is to use a cheap pizza oven and a temperature controller. Controlling the solder curve is rather easy as the oven heats fast and cools fast due to bad insulation.

But what are possible problems?

The best possible solution for reflow soldering are the professional reflow through put ovens like we have them in our assembly plant in Eger Hungary. 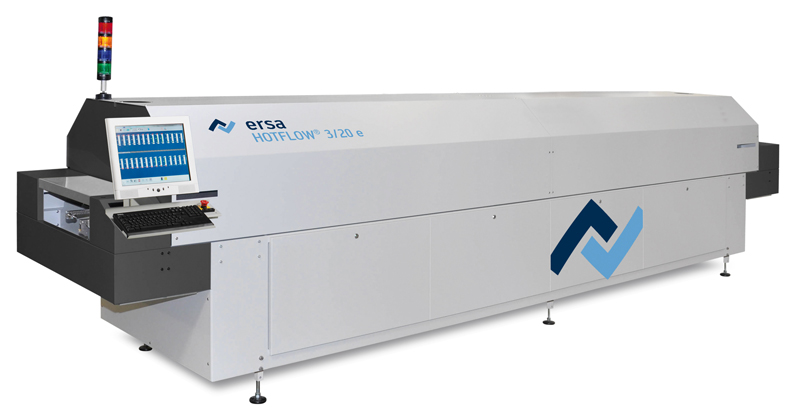 These ovens, with power up to 19KW, have different heat and cooling zones which are closely kept to a certain temperature. These are fixed to a specific value. Very rarely do we use another profile, for example for IMS boards. 4 to 5 profiles are used.

The variable in the whole process is the speed of the conveyor belt. And even that is rarely adapted.

It is finding a solution that works for most of the products. On the product itself there are different components with different specs but they need to pass through the oven at the same time as they sit on the same board. So also here, it is the goal to find a middle way.

In a through put reflow oven the board moves from one zone to the next, not affecting the zones itself but undergoing the effect of them on the board as the board passes through. This results in the best possible controllable process and thus soldering curve.

In the reflow chamber oven like the eC-reflow-mate, all this works differently.

A very fast ramp up of the temperature like in the throughput oven is not possible as much of the energy goes in heating the oven. A simple curve of 245°C with a dwell time of 10seconds takes the oven up to 245°C in one hit, going as fast as possible which is still very much slower than the through put oven as the lamps need to heat up first and then need to heat up oven and board.

The down side was that this made controlling the curve slow as thermal inertia grew bigger due to the very good insulation. The up side is that one can run the soldering profile multiple times in a row without overheating the oven from the outside.

But what is needed to achieve adequate soldering?

That is why we cut off the heat some 8°C before the programmed temperature is reached so an overshoot will not happen. Setting the dwell time short (that is why we suggest 10 seconds) will make sure that the average suggested dwell time of 30 seconds will be achieved and proper soldering will be the result.

In our experience a theoretical curve as specified in the component specs of a flat preheat at 150/160°C and a very fast ramp up to 240°C with controlled cooling after that, is not possible in reality. Only with a very large through put reflow oven do you come close to what is described in the specifications. In a through put reflow oven there are real physical temperature zones under which the board passes. Or in other words it is exposed to a zone and then also removed from that zone whereas in a chamber oven it remains still in the same environment. The aggressiveness with which you can remove heat in a chamber over is inversely related to the insulation. The better insulated the slower you can control the temperature.

As standard leadfree soldering curve for the eC-reflow-mate we suggest:

Back to eC-reflow mate overview