The Agoria Solar Team is a team of 20 engineering students from the KU Leuven. Their goal is to build the best and most innovative solar car to participate in several international races competing against university teams from all over the world. Normally, the team would participate in the biannual Bridgestone World Solar Challenge this summer, the most prestigious racing adventure for solar cars in existence. Here, teams must cross the Australian Outback from the very north to the very south, a race of more than 3,000 kilometres. The previous edition of this challenge was won by the Belgians, so expectations for the Agoria Solar Team are higher than ever. Due to the ongoing pandemic, the race in Australia was cancelled. Solely using power generated by the sun, the Agoria Solar Team will be racing other international teams not only to determine who builds the better solar car, but also to determine who has the stronger team to overcome all the challenges they face when driving through the harsh, unknown environments.

Solar cars are a great example of what is possible using renewable energy and the latest engineering technologies. Creating a more sustainable world by researching greener ways of daily transport remains an important pillar in the Solar Team project. By organizing events like the Solar Olympics, where hundreds of high school students are challenged every year to create a project on solar energy, the team wants to spark an interest in the field of science and engineering for many generations to come.

When designing and making a solar car, the electrical system is one of the most critical parts of the car. All the electronic modules within the car need to be able to communicate with each other, this while being as robust and reliable as possible. Thanks to Eurocircuits, the team ensures this reliability by working with the best PCB manufacturing techniques available for the most critical and important components of the solar car.

For the ninth Belgian solar car, the team has various electronic projects running in which Eurocircuits has helped by providing PCBs. An example is the new inverter, which is used to deliver and control the power that goes to the motor. Using Eurocircuits experienced PCB manufacturing, we don’t need to worry about the complexity of our designs which helps speeding up the prototyping of electronic modules. 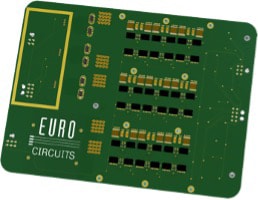 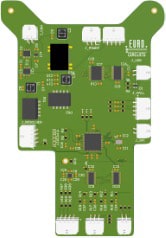 Another example of the craftsmanship of Eurocircuits is found inside the battery pack of the solar car. The control electronics of the battery, better known as the Battery Management System, is now expanded with a so-called pre-charge circuit, which makes the system more compact and easier to work with compared to a normal architecture.