The Adventures of RoboTeam Twente

The vision of RoboTeam Twente is innovation and inspiration in the field of robotics and artificial intelligence. We thrive to achieve our mission by participating in the small sized soccer league of the RoboCup with our custom made soccer robot team. We also give workshops and attend events to inspire others in the field of robotics and AI-from children to adults- and show them how fun this can be. 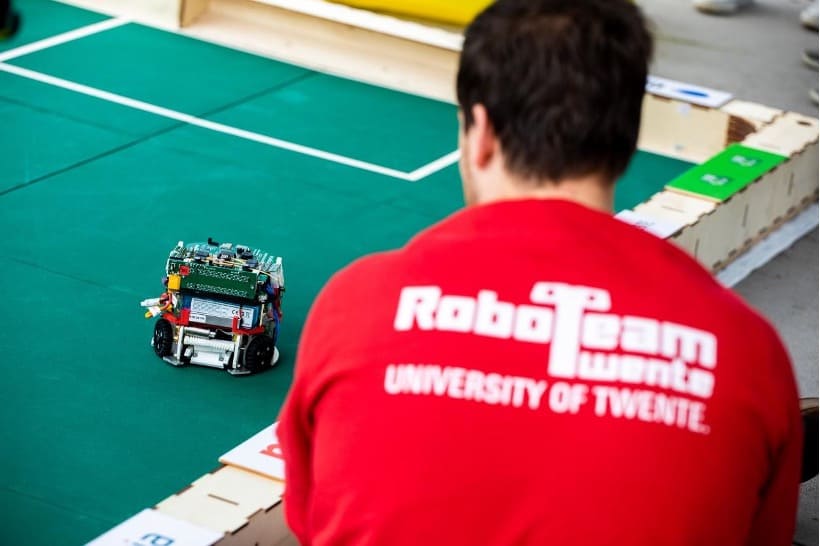 We are the fifth generation of RoboTeam Twente and many advancements have already been made by our predecessors. However there was and is still much to improve upon. We focused on making our hardware more robust. This was done for example by adding ESD protection to the electronics and replacing plastic parts with metal parts in the mechanics of the robot. The software has made a redesign of the system, which makes more advancements possible in the future, for example timed actions. The foundations for a new path planning and tracking algorithm have also been made.

The RoboCup was supposed to be in Bordeaux this year, however due to corona the physical event was cancelled. The organization worked very hard to make an online event in which all teams could compete with their software in an online environment. All teams were very enthusiastic and we learned a great deal from participating and competing with the other teams. Next year we will really be able to show off our team by first having practice matches against the German teams and then going to the RoboCup in Bangkok.

Not only have we worked hard on the technology, we also moved offices. Now we have more space to work on and test our robots. Furthermore, at the end of the year we were able to give a demo on the Dutch Innovation Days and managed to inspire some youngsters of how cool robotics and AI is. Our recruitment efforts also paid off and a very enthusiastic bigger team is now going to continue to work hard on our mission.

The future is looking bright, and our new team is very enthusiastic to continue working to inspire and innovate in the field of robotics and AI. We thank Eurocircuits for being a part in making this project a reality and we hope to continue working with them for a long time. 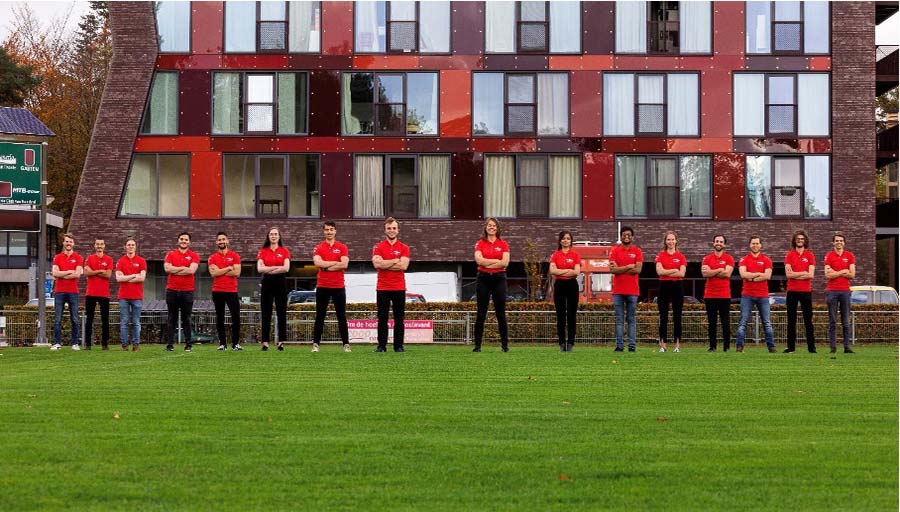 The robots of our team are all custom made. This includes all the PCBs. We have seven PCBs per robot and a total of 16 robots. This means that Eurocircuits is very important to us throughout virtually our entire project.

As mentioned before, we have 7 PCBs per robot. These can be subdivided into: 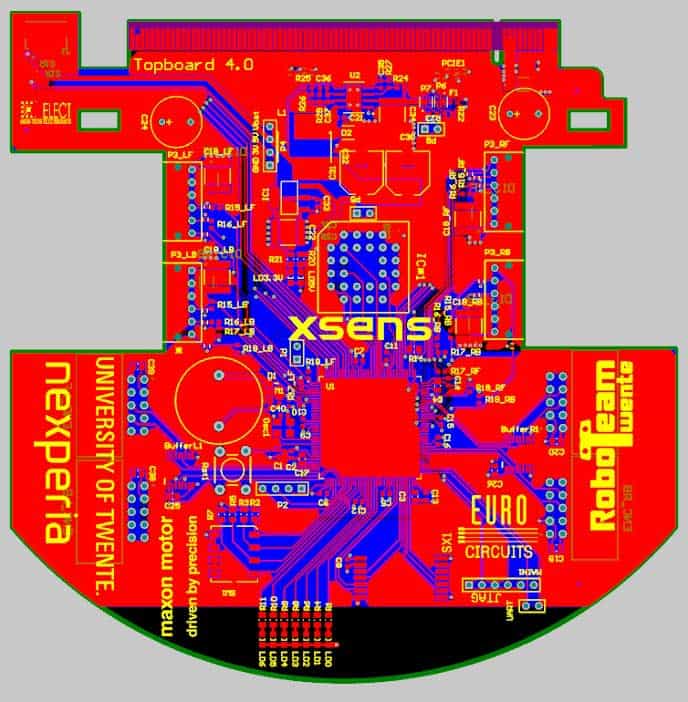 This year’s team has redesigned the TopBoard. The focus was on making the electronics of the robot more robust and reliable. The new power signals are now more stable thanks to our new DC-DC converter. The rest of the lines have become more reliable thanks to making the PCB four layered. This means there is a separate ground and power layer on top of the two signal layers we already had. Furthermore ESD protection components have been added. Some of these components are too small to solder by hand and thanks to assembling services we were able to actually print and assemble this PCB.

The other part of electronics that was redesigned is the basestation. This is not part of the robot, but the basestation is responsible for the communication between the central computer and the robots on the field.

Previously the basestation was a pre-made PCB, now a custom PCB and a new packet protocol were designed. This new custom made PCB allows for wireless two-way communication with a robot at 15 Kbps, which is over ten times the speed of our previous basestation. The PCB contains an SD-card for logging, a screen for real-time statistics, and can be powered by a battery. The new packet protocol allows us to send a multitude of different commands and settings to the robot. It also allows the robot to send much more important feedback back to the computer, such as data from our accelerometer and kalman filters. This information leads to better robot control in our AI, and faster development throughout the year.

All these PCBs were printed by Eurocircuits and thanks to their quickly delivered prototypes we were able to make multiple versions within the year and improve. Now the new team can work hard and make even more improvements.

Through the eye of the needle
Scroll to top