Back to Walk – Developing Exoskeletons

Humans have endo-skeletons, an internal skeleton, while some animals have an exo-skeleton which is an external skeleton. We sometimes see sci-fi powered exoskeletons killing machines in films like Alien, The Matrix, Iron Man, but less fictional are emerging exoskeletons that are meant to augment the human body. These are used for military, commercial, and personal purposes allowing people to work longer and carry heavier loads. More excitingly are exoskeletons that are designed to help people who lost, or were born without, capabilities that the rest of us take for granted like walking.

Thankfully we are increasingly aware of needing to create inclusive spaces and infrastructure that aren’t strictly designed for a particular baseline of ability. But infrastructure takes a long time to re-design and adapt. So alongside that we should develop technologies that empower and liberate people with a variety of abilities to perform common tasks without the need for help or special consideration.

While we’re quickly able to imagine what an exoskeleton may look like mechanically, it’s less obvious what electronics are required in such a system. To understand more about that I’ve been in touch with Project MARCH, an ongoing student project at Delft University. The project aims to help those with complete spinal cord injury — a permanent and incurable condition — with immobility below breast level but with full control of the arms. The MARCH V exoskeleton is the latest iteration, with a new team of 26 students has already started working on the next one, MARCH VI. I’ve spoken with electrical engineers Mart Haarman and Robbert Friendwijk, and Julie Blijdenstein who is part of the partnerships and public relations team. 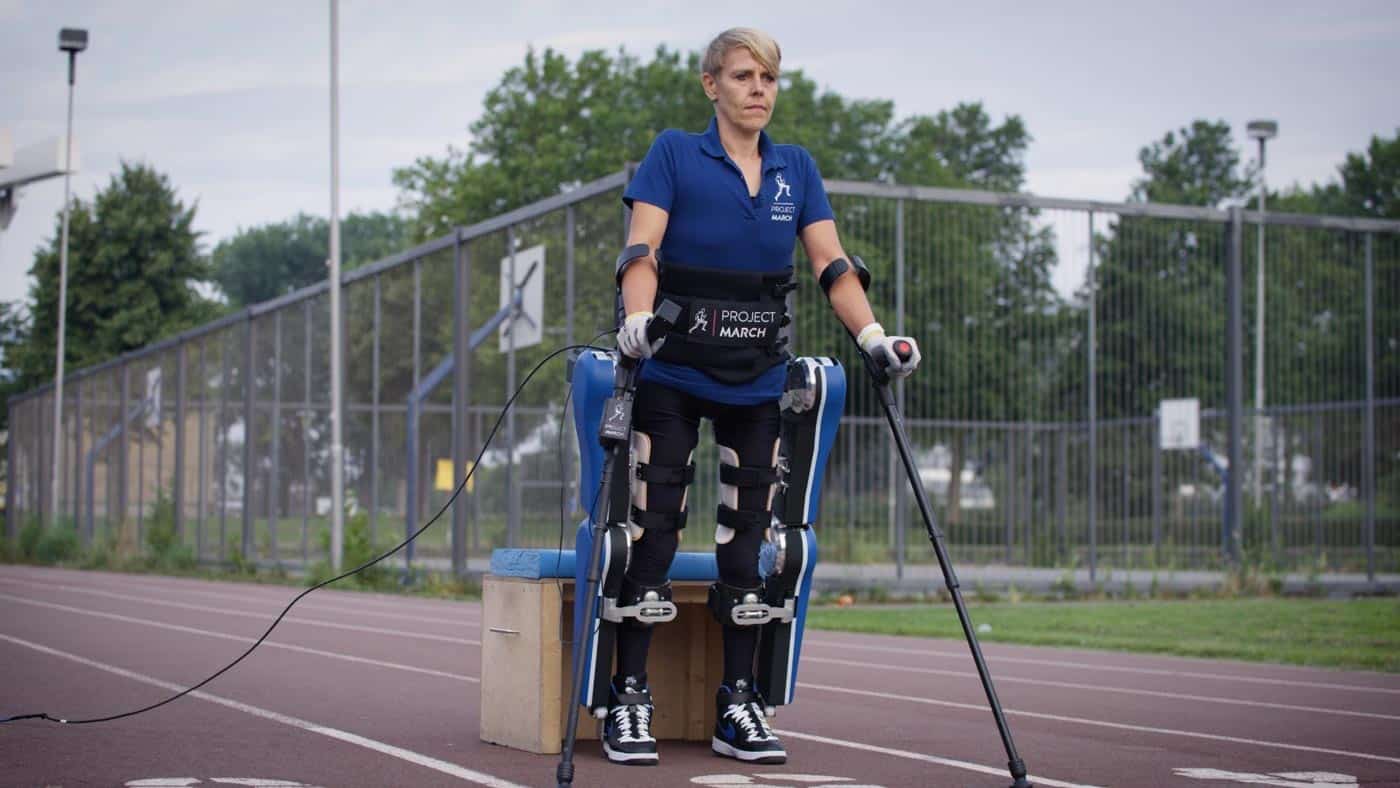 Why work on Exoskeletons?

Delft University of Technology has many D:DREAM Teams where students work on large ambitious projects, most around the theme of transport. Project MARCH is unique in that it is primarily about empowering the human operator rather than powering a machine. I was first curious to hear what motivated the students to choose the MARCH project over the others. “MARCH directly focuses on helping people to be able to walk. This goal not only allows us as engineers to broaden our electrical engineering knowledge, but also learn about the social and ethical aspects of life. Also, working as part of a large team of 26 full-time members offers maximum team-spirit and makes MARCH one of the most exciting teams to be working with”, Robbert and Mart told me. If you work on an innovative solar-powered vehicle I can certainly see that there must be a great thrill and satisfaction in seeing it break a record, but experiencing your work enabling someone to walk must be at a different level altogether. 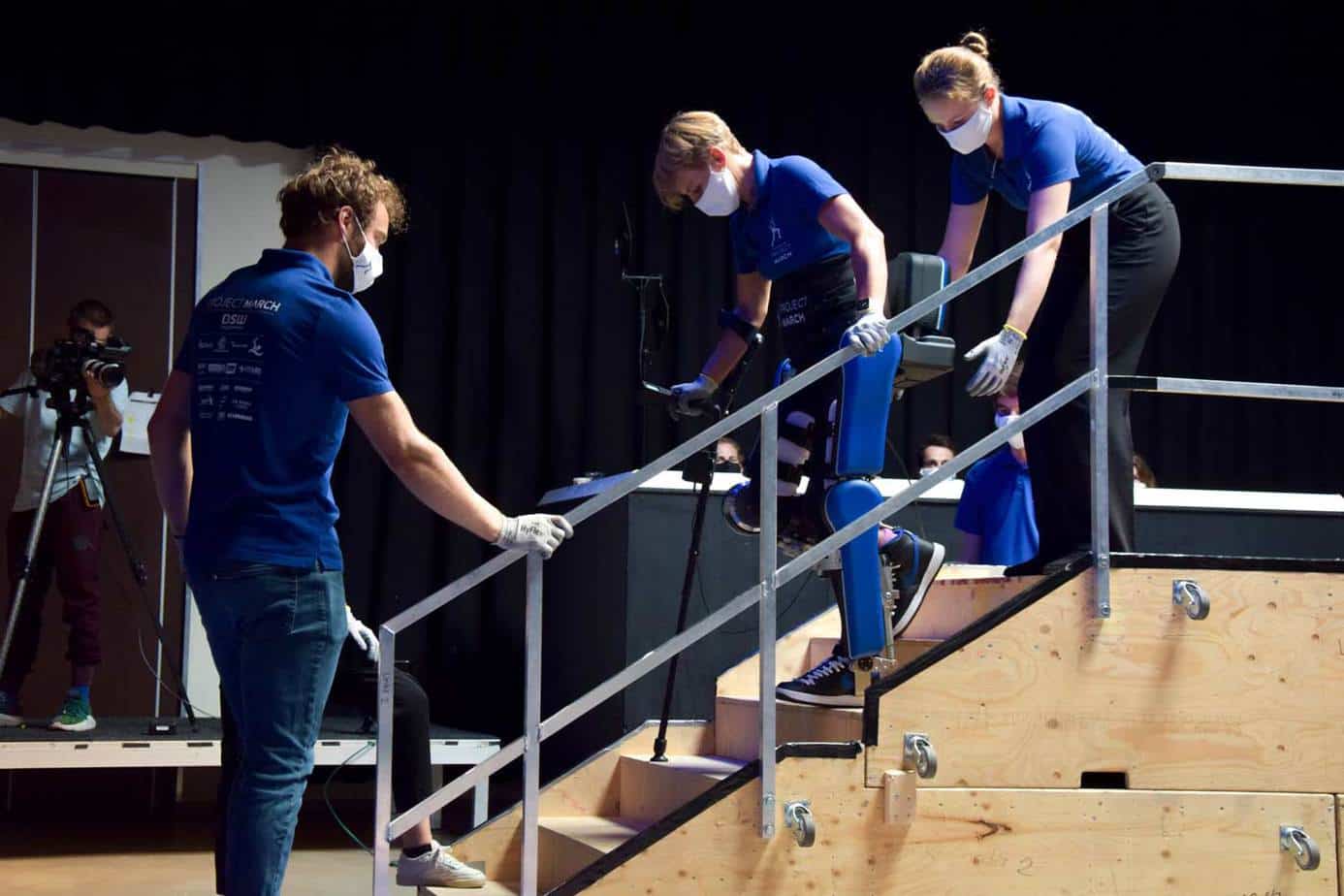 Pilot Sjaan in the MARCH IVc exoskeleton on the stairs during the reveal in August 2020 where the exoskeleton completed all six obstacles under 15 minutes. Here we can also see the safety cathers who make sure Sjaan doesn’t fall if something goes wrong. 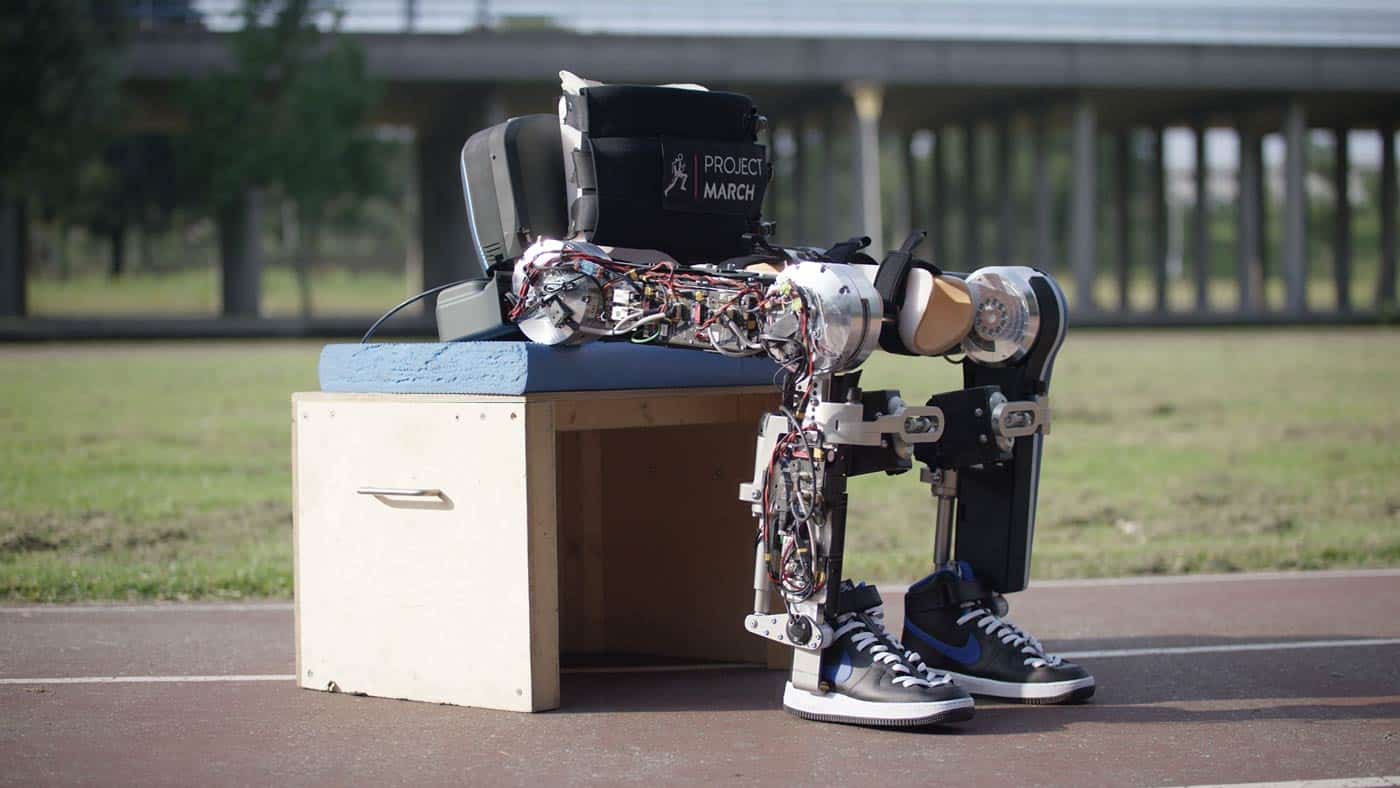 The MARCH IVc without the leg covers reveal the amount of electronics and wiring in powering and controlling the exoskeleton.

The function of the skeleton is to safely control movement directed by the person operating it, the pilot. It weighs 35Kg and is made of different materials, for example aluminium for the ‘bones’ and carbon for the bases. Mechanically there are a pair of joints at the hip, knee, and ankle levels, where the hip has two separate joints. Power to these joints and supporting control electronics start at the main battery, currently 16 cells of 3.2V 3.3Ah LiFePO4 connected in series for a theoretical 170Wh capacity. The battery might change, though, as the team’s goal is to provide 30 minutes of continuous movement on an unknown terrain. Yet if one considers that there will be periods of non-movement and terrain that isn’t very challenging the running time could be more than that of course. The 52V power rail goes to the Power Distribution Board (PDB) where it is split in two. The first is converted to 12V, 5V, 3.3V for the various subsystems (backpack fans, controller boards, and so on). The other runs through a solid state relay that allows an emergency shutdown, and then split into eight rails: four for the left side joints and four for the right side’s. At each joint its power rail is also used to power local EtherCAT controller boards. 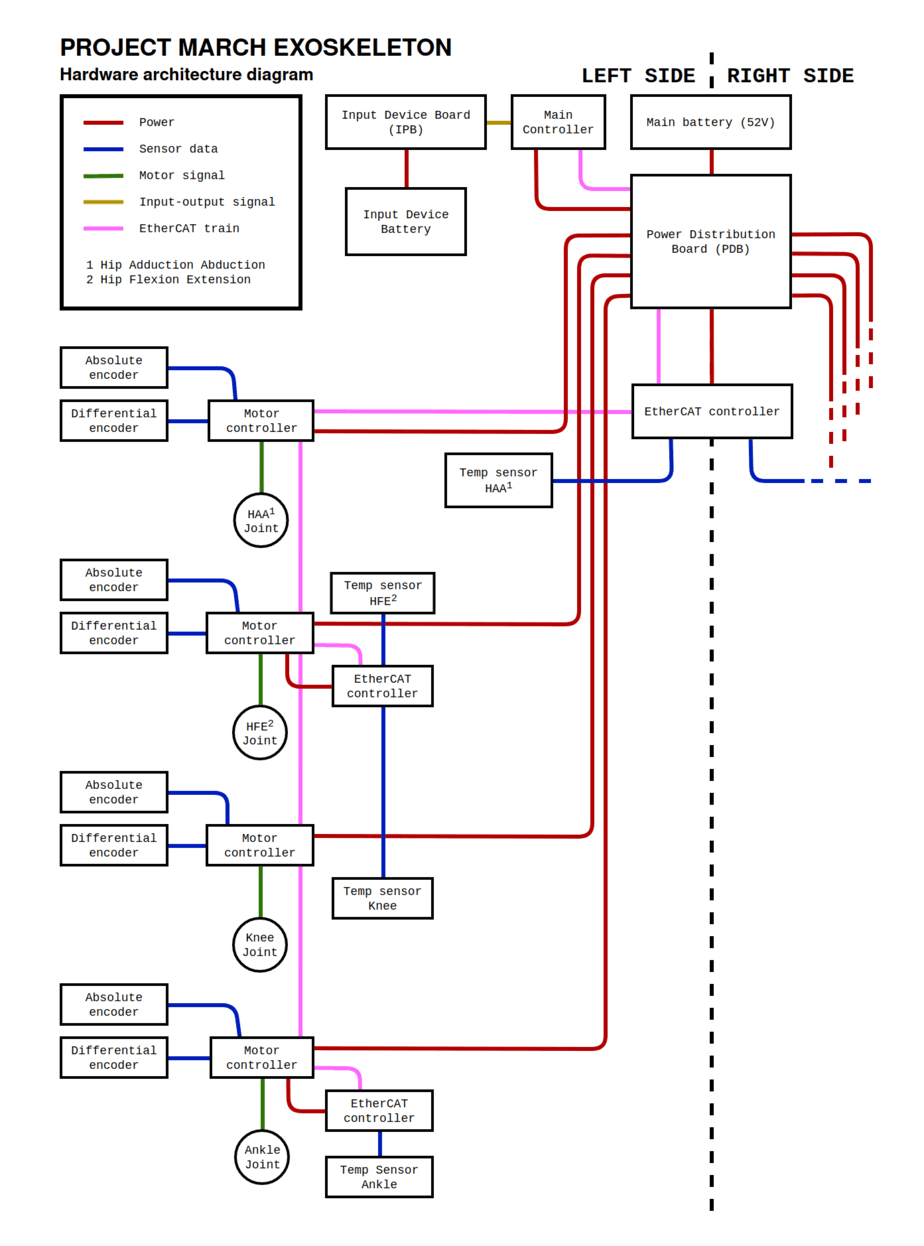 Safety is very important, of course, and designed into the subsystem controllers together with a global emergency stop, as mentioned before. During development test-runs there are always ‘safety catchers’ that look out for any anomalies or danger to the pilot or the exoskeleton itself and are able to trigger the emergency stop. Mart adds an important point that “you should realize that an exoskeleton is not easy to operate for any pilot. It involves quite a lot of training and so it is also quite possible for the pilot to make a wrong move that will require an emergency stop.” The current team’s focus is to improve the usability of the exoskeleton for daily use, which may take it to a point where less training will be required.

Having only an academic year to make their contribution to the system, and also for managing costs, getting the right balance between custom-made electronics and buying them off-the-shelf is crucial. So we might have a single-board-computer as one component, and a custom board with peripherals — ADCs, sensors, comms, etc. — that accepts off-the-shelf a microcontroller module as another. Quite importantly for this project, custom electronics allows the team to design them just the right size and shape. Mart adds that “our motor controller is an example in the sense that it does support our communication protocol but does not contain the connectors we’d like nor has enough spacing to mount connectors, hence, we design our own PCB with a pinout scheme that fits the motor controller.”

The Input Device Board is integrated into the right crutch handle and has a screen where the pilot can view all the actions that they have triggered. The pilot’s main control is of the gait and a menu is used to navigate all the available actions. Selection is done using a scroll wheel and trigger that’s on the crutch. To confirm commands, the handle vibrates in order to provide a convenient signal to the pilot that the gait has started or stopped.

The pilot is considered an integral part of the team and of the exoskeleton’s development. Only they truly experience the physical connection between the human and the machine — through the design of ‘fixtures’ — and are the only ones who can provide meaningful feedback. I contrast that with other engineering projects where the product is developed and only then tested by the user; here this cannot work.

I’ve asked the team about how COVID-19 has affected their project so far. It appears that they’ve handled most of the restrictions on physical proximity through stricter scheduling, where only part of the team is at one place at any given time. It seems to me that if done right this could actually increase productivity because tasks are now tightly bound to short time chunks.

The Cybathlon of ETH Zurich is held every few years and is where teams like MARCH compete: “a unique championship in which people with physical disabilities compete against each other to complete everyday tasks using state-​of-the-art technical assistance systems. Beyond the competition, the CYBATHLON offers a platform to advance research in the field of assistive technology and to promote the dialogue with the public about the inclusion of people with disabilities in everyday life.” Unfortunately, COVID restrictions prevented last year’s MARCH V team from safely participating in Cybathlon that was held in November 2020, although I’m certain that that does not take away any of the enthusiasm from the larger mission.

Lots of Walk Ahead 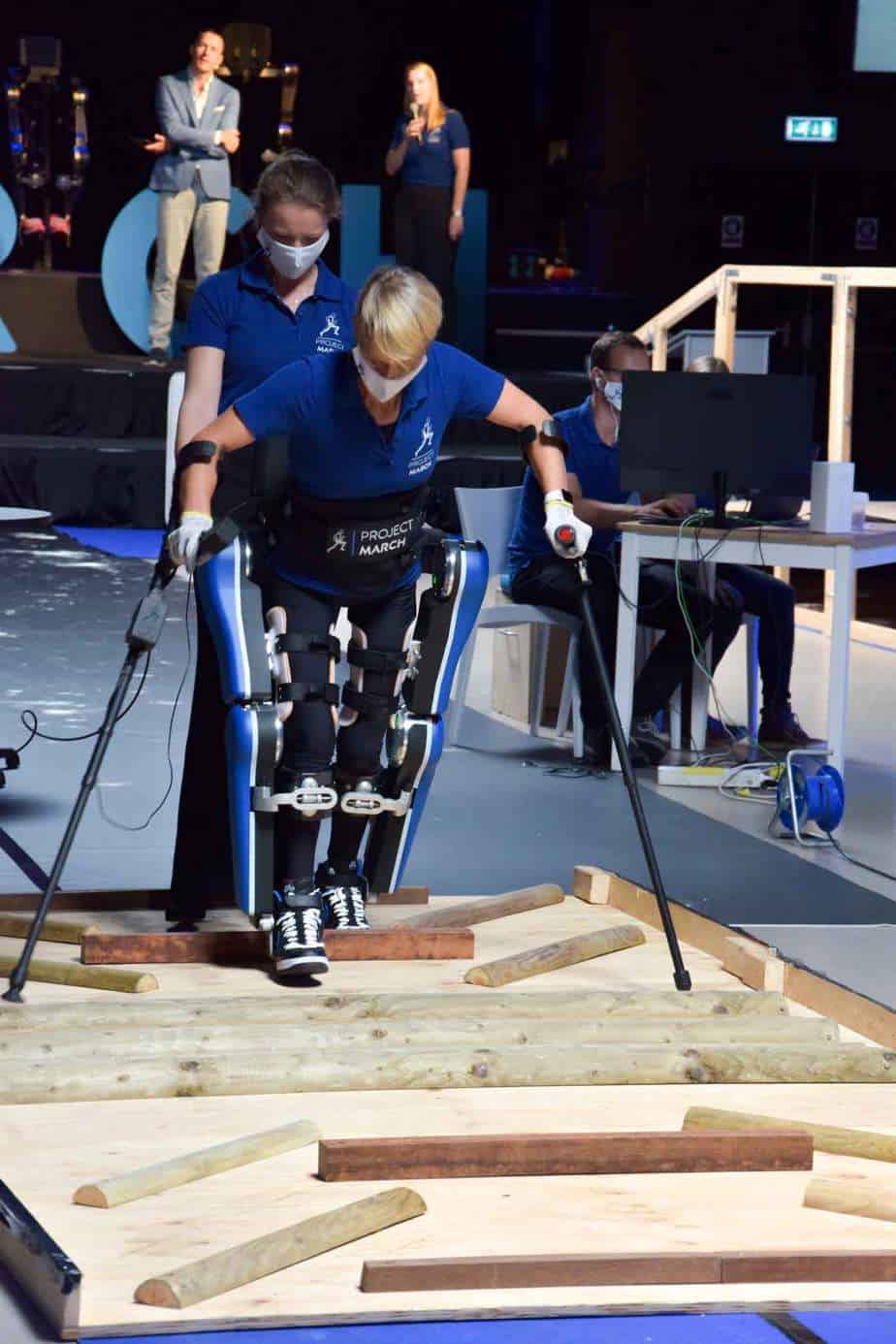 Pilot Sjaan in the MARCH IVc exoskeleton on the rough terrain during the reveal in August 2020.

Student-run projects are important for both advancing the state-of-the-art of assistive-technology, without being constrained by commercial viability, and for training European engineers to build and manage real-life real-impact large projects. I’m pleased that Eurocircuits supports this project by supplying the custom PCBs free of charge and is contributing on both of these fronts. I wish the MARCH VI team success in achieving their ambitious goals and look forward to the outcome late next year.

Saar Drimer is an editor at Eurocircuits and an electronics engineer.

The Function of Beautiful