Swissloop is a student organisation supported by ETH Zurich, conducting research on the Hyperloop technology and its application in the real world. In the past years, we have taken part in the SpaceX Hyperloop competition. This season, we won six awards during the European Hyperloop Week (EHW) in Valencia, including the complete pod and power electronics award.

Swissloop and the project year 20/21 were presented in more detail in the last blog post.

The General Control Board (GCB) is a self-designed breakout board featuring a 32-bit STM32-H723 (ARM Cortex M7) microcontroller, a MachXO3 FPGA with an embedded flash from Lattice Semiconductor, a SD-Card Adapter and numerous GPIO Pins accessible via the pin headers. The outstanding computational performance of the microcontroller as well as the possibility to implement safety critical components inside the FPGA gives the GCB very high flexibility and almost unlimited use-cases. 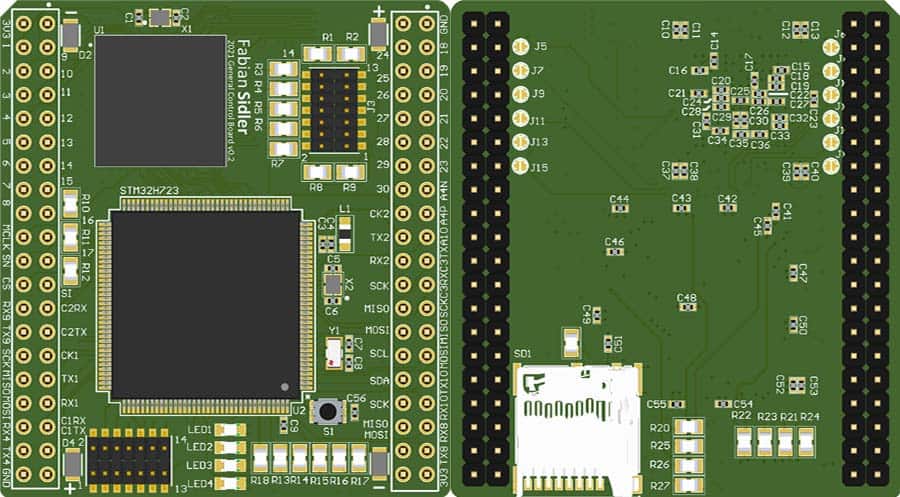 This PCB is used in every electronic control system where computational power is required. Therefore, a total of five GCBs are used in this year’s swissloop pod. Three for the inverter control system and one each for the vehicle control unit and for the battery management system. To make use of this PCB, it is simply plugged into the respective carrier board.

Screenshot of the General Control Board in Altium Design

The approach of the GCB turned out to be extremely efficient and helpful. Firstly, since a lot less repetitive engineering was carried out and thus time could be saved. Secondly, all team members could use the same hardware and programmed their software for the same microcontroller. Thus, a lot of code and knowledge about the hardware could be shared and did not have to be learned individually for different hardware architectures. The engineers could work with the first version of the GCB from early stages. This way, a lot of feedback could be collected, which was then implemented in the second and final version of the GCB. 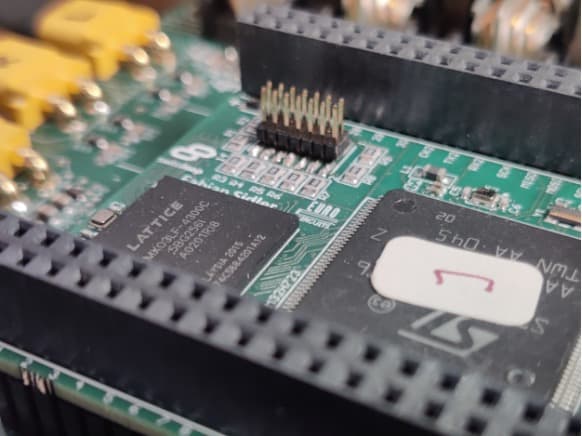 Finished and assembled General Control Board

Since this PCB is used several times in our pod, and we also had to provide for replacement PCBs, a total of 20 pieces were ordered. Because of the large quantity of ordered PCBs, we decided to make use of the Eurocircuits assembly service. This decision had major impact on the design of the PCB, since smaller parts and IC’s in more tightly integrated packages suddenly became feasible, since the PCBs no longer had to be solderable by hand. Thus, 0402 parts were used for most of the passive parts, and we could even use the FPGA in the ball grid array package. We were able to make a more impact design and spared a lot of time though the use of the assembly service.

This season, a sensor network architecture based on a linear bus topology using the CAN FD protocol was developed to replace the star topology Swissloop used during past years. With this switch, the total cable length was greatly reduced and cable routing was simplified. Although CAN FD is the new industry standard used for automotive systems, the protocol is not yet widely supported by state-of-the-art industry sensors. To still be able to benefit from the advantages and the CAN FD protocol, a special translator PCB was developed, to connect any sensor to our CAN FD bus system.

This translator board is based on a STM32L552 microcontroller (with an ARM Cortex M4 core). The adapter supports a wide range of digital interfaces (like SPI, USART/UART, I2C and RS485) and can also measure up to 5 analogue signals (voltage, current or resistance). Furthermore, it can also measure special signals like Encoder signals and interrupts. The sensor software is based on a layered approach and provides features like time synchronization of nodes, address management and sending commands. All the nodes on the bus can be remotely updated without having to access the PCB. Further, the system is highly configurable to allow for many use-cases.

Both the General Control Board and the Sensor Interface were produced and assembled by Eurocircuits. The online ordering and configuration process proved itself to be self-explanatory so that even our new engineers had no difficulties in placing orders for PCBs. Since we are a student organization and thus don’t have a lot of experience, we were very grateful for the competent staff of Eurocircuits. With their help, we were able to find the last errors in our configuration and ensure that the PCB would be manufactured according to our specifications. Although the semiconductor shortage also affects student teams, we were extremely happy when we were able to source all the parts directly from the manufacturers and just send them to Eurocircuits without complications. Overall, we were extremely satisfied with the service provided.

We will take a Break for Christmas 2021
Scroll to top